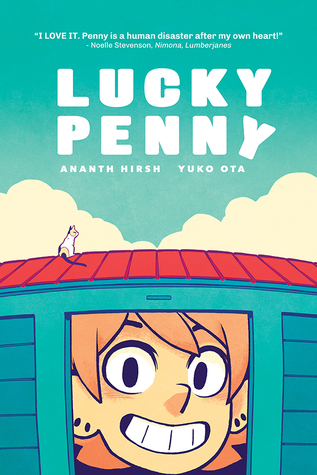 This was pretty great, though I have to say the ending really didn’t make sense and just went totally over my head.

Most of this book is about Penny. Penny who has no home, no place to stay, so she lives in a storage box with all her stuff. 😛 She works for a 12-year old kid at the laundromat (don’t even ask, I also have no clue why or how), and her luck is terrible (like really terrible). Throughout the book you see her fall in love, get in trouble, kick kids their butts (also very weird), find a cat and name her Boyfriend (she thought the cat was a he), and much much more.

As I said it borders at times on way too silly, but the ending was totally weird. So kids steal her stuff? Suddenly there are 100 middle school kids, there is an epic battle? Walter is captured? Wrestling commences, and much more other stuff? Was that all a dream? Or just something else? I know one thing, it makes me deduce one point from the book.

Penny was an epic MC though, I really liked her and how even though stuff doesn’t always go right, she continues on her road to find happiness. I loved how resourceful she is (showering at the gym, staying at the storage unit, sending her mail to her work, etc.), it really shows great character. No matter what lands on her road, she will defeat it. Her love for romance books (with awesome titles though also a bit cringey) were fun, especially when she saw various things in real life as something out of her books. 😛 I loved her enthusiasm for her books and how she was able to make everyone love the books, even if they never did before. Even me. I normally stay away from those books, but I wouldn’t mind reading them now if they were as awesome as Penny’s books were.

The art was AMAZING! Really, it was! Sometimes I am a bit on the mixed side of things, but I just adored the art here. The expressions of Penny (and also others) they just made me laugh so much.

Walter and Penny were a cute couple, and I liked how they grew to each other. It wasn’t instant lust, as some books do when people meet, instead you can see them get closer to each other, until that first kiss, which does take a while to happen.

All in all, I truly enjoyed this book to bits, though again, that ending could have been so much better. 🙁

But I would still highly recommend it. It has romance, comedy, a great cast, and fantastic art.