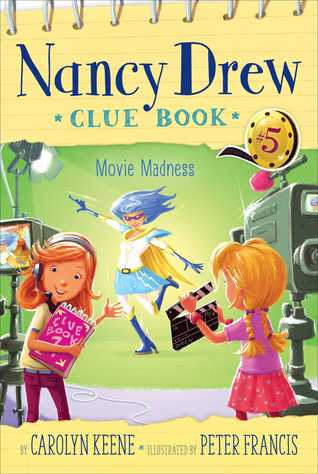 Slightly better than the previous book, but still a bit of a disappointment. I am not sure if I will continue with this series.

The first books were great, but this one and the previous one were so-so/ok-ish. It is just that it follows the same pattern in each of them. Something goes missing/something goes wrong > girls have 1 or 2 suspects > find clues > ask people > scribble off suspects > find a new suspect > it gets removed > another suspect > done. Add to that the constant: We can’t go further than x blocks from our home and only if y happens. We get it. You are kids, you can’t go that far. Now stop saying it over and over again.

And in this one I was mostly frustrated with George. She kept being bleh about everything. OMG, I don’t want to do this > whines, complains, is a bitch. Really girl, if you don’t want to do it, either go away or just shut up. Don’t keep on spoiling it for your friends. That is just rude and mean.

In this one a movie star’s boots go missing, and our Clue Crew goes after it. They want the movie to stay in their little town so they go all out to find them. So we go through a whole list of suspects (well, OK, one suspect at a time), until we get to the right one. It was fun that everyone was a suspect, everyone had motives, everyone could have swiped those shoes.

The ending was pretty good, though yeah, it was no wonder it was that person, they were the only one left that could possibly be the real criminal.

All in all, interesting idea, but it was a bit boring after 2 suspects.

The illustrations were fun though, I love how Nancy and her crew looks in this series.