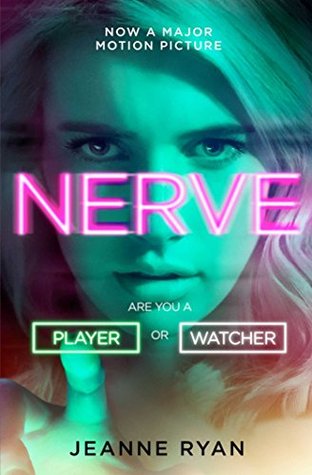 5+ stars. Totally awesome, the dares indeed got creepier and more daring, just like I had bet they would!

I spotted this book some time ago, and also saw that it was getting a movie adaptation. I was quite curious about the book. Not always do books about dares work (often the characters just go totally crazy), but I still wanted to try it out. And magically (and miraculously) while I was thinking of getting the book online, I found it at my bookstore, in English, and only 9.99 euro. Of course I couldn’t leave it then. 😛 It was fate.

The first part of the book was a bit slow. I wasn’t sure what to think of Vee (yes, that is what she calls herself, and we later find out what her real name is). I found her a bit too mousy, a bit too silent. I was wondering how this girl would do dares. She didn’t seem to go much out of her comfort zone.
But then stuff happened that pushed this little mousy girl over a border and she tried out a dare, just for fun, and not even a big one. Just a small one, throw water over yourself at a coffee shop and shout a certain sentence. Not that hard right? Well it Vee quite some courage to finally do that, but after that? You saw a shift in Vee.
Throughout the book you see Vee change. A bit good (finally taking a stand, finally stopping being so afraid of everything), a bit bad (her attitude towards her friends). It was quite a fun change, though I have to say that even though she did gain a bit more attitude, and a bit more bravery, she still kept her standards. She wasn’t going to do stuff that would be too dangerous, or would be bad. I quite liked that. She kept her head cool, even when faced with enormous prices and money. Unlike a lot of the contestants near the end, she was one (together with swoony Ian) who thought before she did anything.
Also with what she is trying to achieve at the end, after everything? I can only applaud that she is doing that. I wish her all the luck.

Ian? OMG, I just loved him from the first page. Even if I was a bit suspicious at times of him, I just knew deep down he had his reasons, I knew deep down that he was a great guy. That his affections for Vee would be true. Did he turn out to be that? Because as you know feelings are just feelings, not fact. Well, you will have to read the book yourself to find that one out. 😛

I am not sure what to think of Vee’s friends. On the one hand, I liked her best friend. On the other hand I didn’t. She acted quite selfish at times. Yes, I can imagine you might not be able to play in the dares due to the play, but that doesn’t mean you have to get pissed because your best friend wants to try it out.

Tommy? Meh. That is all I will say.

Vee’s parents? Sorry, but why wouldn’t you believe your kid? And even if it was true, do you really think that what you did would make things better?

The dares? The first, before the final part, were pretty great, though also crazy. Acting like a hooker? Or asking for condoms from people who are against sex before marriage?
And then the final part started, and the dares truly escalated. Boy, I was shaking my head at how it all escalated and how most of the characters there didn’t care that something might go absolutely wrong. They only cared about the prices. Sure, the prices were pretty sweet, pretty awesome, but to do all that for them? Mm, no.

It was also really interesting to see how Nerve went from just a fun game to play, to something much more dangerous. The things they don’t show you on TV. The things they kept hidden in the dark. It is quite worrisome that kids are allowed to play these games and that apparently no one really raises an eyebrow at how it works. At the fact that some of the stunts are truly life-threatening.

The ending was truly a rollercoaster. Wow. Just wow. All that happened there, all the characters and what they did. Even though they aren’t the main character(s) they played such a huge role, and they were so interesting. It felt a bit like a psychological research, see who snaps the first. See who has the most to lose. See who goes for everything disregarding any reason or feeling for safety.
Those last pages definitely were a nice touch. You thought it was over and then bang!

All in all, this was an amazing book, and I enjoyed it so much! It had twists and turns, daring dares, and so much more! I would highly recommend this book!