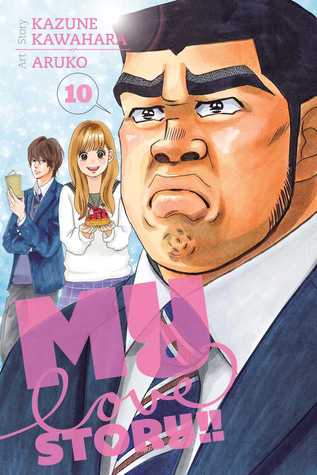 Finally we are through this arc that started 2 volumes ago. It never was one of my favourites, and it never will be. That baking guy should just have gotten the hint already, but oh no, mister tough guy had to fight for something that he knew was a lost cause. Rinko loves Takeo, will never leave him. I hated the baking guy for all he said to Takeo, how rude, mean, bleh he was. So yeah, I am so delighted that we are through this one and getting back to normal cute Takeo x Rinko stuff.

Or so I thought. 😛 Then again I don’t mind this new arc as much as the previous one. I can imagine what Takeo is going through, and how Rinko must feel. Still I do hope that Takeo will man up. Touching someone you love isn’t bad. Hugging her isn’t bad. She is your girlfriend. She loves you, and really, why are you getting worked up so much over a hug, or a caress. He makes such a big deal out of something that is natural. Of course, um, I do think it will be awkward, and he probably will have to be very careful, but then again, I also think that of their kisses. Not because they don’t match, but because Takeo is so big he practically eats Rinko when he kisses her…. But I will still cheer for these 2, hoping they will stay together even when they get out of High School. They do make a super cute couple.

This one also brings the school festival, and boy, I laughed so much seeing Takeo in that police outfit, running around the place and helping out everyone. I also loved Rinko’s face when she finally saw Takeo in the police outfit. Haha, she practicality swooned. So cute!

I do love the character growth, not only in Rinko, but also in Takeo. Especially Takeo I should add. Before all this people were quick to be afraid of him, turning to Suna, but now they are finally seeing that this big guy isn’t doing them harm, he is helping them. He also has learned to explain what he is doing so people understand. Not only that, but he is getting better at understanding things, there are still a few things that are quite common sense (then again, common sense isn’t so common), that Takeo is learning. He is also learning that people love him, that Rinko isn’t the only girl in the world who thinks he is hot and wonderful. And that makes me so happy. He deserves all the happiness.

There is also a bit more development between Suna and Takeo’s friendship. I loved that the author added this, as the bond between Takeo and Suna is so strong, but it seems that there are still problems (as we, the reader, could already see at times).

What more? Mm, not much, though I do wonder how the story will end. We still got 3 volumes left, but I can’t imagine an ending just now. So I am curious. I hope everything will end clean and nice, and doesn’t leave things open ended, or that the ending is rushed.