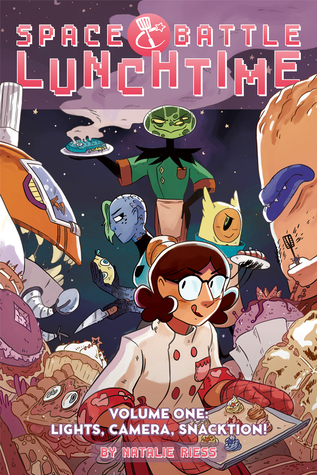 Thanks to my boyfriend for buying/pre-ordering this book for me! Love you!

Get set, get ready, and BAKKKKKKE!

I do love cooking shows (especially if they have delightful little twists and turns, or fun announcers/hosts), so when I spotted this one a few months ago (the single volumes) I knew I had to have it. So I waited, and waited, until I finally saw that there would be a volume bundling the first few volumes together. My sweet boyfriend apparently secretly pre-ordered it for me, and it came in 3 days ago. Of course I had to read it immediately. It was just too tempting to say no to.

Say hello to Peony, one moment she is a super awesome baker making delicious, scrumptious, do-want, desserts, and the next she is whisked to space to participate in a TV Show. Haha, I loved the look on Peony’s face when she found out that what she said yes to was really in space, and not just a name. 😛

Peony is pretty much awesome throughout the book, she is undeterred by all that is happening. Sure, she thinks it is exciting, and at times you can see her worry. But she will give it her all. She will make something awesome even if she doesn’t know what she is doing since she doesn’t know all the ingredients. I really loved that, a lot of people would just have given up. Would just have waved their hands in defeat, but Peony? She looks at whatever she has in front of her, and makes something spectacular out of it.

And not only that, she is sweet, kind, and friendly towards most of the contestants (then again, I also wouldn’t be nice towards mister scary melon head, especially since he isn’t nice to anyone.

I loved seeing parts outside of the contest. Her eating dinner (and apparently not even being afraid of what might be in the food) with friends/people she is slowly regarding as friends. And other parts. It was fun, and it also gave an insight on the place were the MC is now. I do have a question, isn’t anyone on Earth wondering what happened to Peony? Or did she manage to get a communication in to Earth to let people know she is OK?

The contest is not only littered with special new ingredients and strange kitchen appliances, but also threats and dangers. People are doing anything they can to win. One of them goes really really far. That ending, oh dear. 🙁 I do hope someone will help, or, since she is awesome, she will escape and let the world know!

The contest was super awesome, man, that is some intense battle. It was definitely interesting to see what everyone was making from ingredients that didn’t look at all edible. I wouldn’t have minded being in the audience, cheering for my favourites.

Aris was a fun character, but my favourite side-character will have to be Neptunia. She started off a bit cold, but I could see that she was actually quite kind. And she is! I really like her, and I hope we see more of her in the next volume. hopes a whole lot

The art is just amazing, I love the style, the colours used, well everything! It is also one of the reasons why I had to have this book. I already knew about Natalie Riess’s artstyle from Twitter, but it is even more awesome seeing it on paper like this.