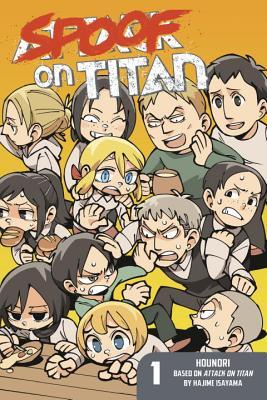 I bought this book for my boyfriend’s birthday a few months ago. I finally decided to also read it.

I haven’t really seen much of Attack on Titan (only saw one episode), or read the manga. But thanks to various other things (like the internet, or that Junior High anime) I do know the characters, and what makes them tick. So some of the jokes I didn’t get, but most I did. 😛

Each chapter is a new story. For instance we would have a story about Mikasa and Eren living together, which also brought some (hilarious) misunderstandings with Armin. Or a story about Hannah and Franz, and how Hannah is getting annoyed at Franz’s constant staring at other girl’s boobs. And how Franz never notices that he pisses off Hannah with that. And of course enough Mikasa trying to show Eren how much she loves him, in various ways, like force-feeding him. Or trying to tell him stuff, only to have him not notice or that he gets distracted by something else.
Also enough Sasha and her constant hunger. I do wonder how she doesn’t get fat, considering all she eats throughout the day.

It was really fun to see all the characters again, and to see them have fun, or make fun of people and their quirks. It is a nice change from the original manga which features a heavy dose of drama, titans, and death.

I will definitely be getting the second volume as well, I want to see more funny stories and more jokes about the characters.

The art was also pretty great, OK, the character’s noses were a bit weird, but that is the only thing.

All in all, I really had fun reading this one. I would recommend it to everyone that knows about Attack on Titan, or has seen/read the series.