What do I have in stock for you today? Well, I have a lovely addition to add to the cast from the Dead (A Lot) series. We have found diary parts from a girl named Janette Galloway – a teenage girl who went to Tripp and Trina’s school and was willing to help Chuck Peterson cheat on Trina . . . ya know . . . before he was zombie bait. Yep. Though going by the diary it doesn’t seem she is such a bad girl. Considering where the diary ends, it makes me wonder if she made it out. I wouldn’t mind seeing more diary parts, or even a short novella by this girl.

Next to that, yes, yes, I got more. I also have some information on the book, some buy links to Howard Odentz books (one of his books, Little Killers, is up for $0.99 until tomorrow (3/11)), and then I also got some author information! So I got a whole lot of you, and I hope you all will enjoy it!

And I want to thank Niki from BelleBooks for giving me the opportunity participate in this Blog Tour! 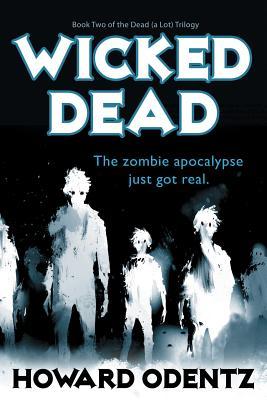 The zombie apocalypse just got real.
Zombies rule. Almost everybody in the world has turned into one, thanks to a nifty little disease called Necropoxy. Sixteen year old twins, Tripp and Trina Light, however, are among the rare humans who are not only immune to Necropoxy–they’re super immune. Even a bite from a zombie won’t infect them.

Great, right? Yeah, but . . . researchers are capturing every immune human they can find–and experimenting on them like lab rats. Just yesterday, the twins and their friends narrowly escaped.
The researchers will do anything to get them back.

That means Tripp, Trina, and their small band of survivors are on the run from zombies, mad scientists, and who knows what else. What’s worse, some people in their group are starting to act funny, which isn’t funny at all.
This is so not how they planned to spend the beginning of their junior year of high school in Massachusetts.
Everyone is dead.
Everyone is wicked dead.

Author and playwright Howard Odentz is a lifelong resident of the gray area between Western Massachusetts and North Central Connecticut. His love of the region is evident in his writing as he often incorporates the foothills of the Berkshires and the small towns of the Bay and Nutmeg states into his work.
In addition to The Dead (A Lot) Series, he has written the horror novel Bloody Bloody Apple, the short story collection Little Killers A to Z, and a couple of horror-themed, musical comedies produced for the stage.

And now for the exciting diary parts that were found! What story does it tell. What happened to our girl?

FROM THE RAMBLING DIARY OF JANETTE GALLOWAY – ENTRY #1

I don’t write in diaries, but there is nobody else to talk to. This isn’t even a diary. It’s my Biology notebook, but I’m not going to need any of the notes anymore. Biology is over. So is Spanish, and Algebra, and Music, and History—especially History. They’re all over.

My date with Chuck Peterson is over, too. It’s not like I thought it was going to amount to much, anyway. He’s been dating Trina Light, like, forever, but he asked if I wanted to come watch him play football on Saturday, and he didn’t think she was going to be there, so I said yes.
Yeah, I know. What a messed up thing to do. Now I’m being punished for it. Not only am I not going to watch Chuck Peterson play football, I’m probably never going to watch Ross Allan, Greg Alexander, Zach Brant, or any of the other football stars run across the field either.

Sure, I’ll probably see them stagger, or crawl, or whatever zombies do—but run? Nope—nada—never going to happen.
They’re all dead. I won’t date dead guys. Not even I’m that desperate.

Still, I really wish I had a chance to go for a ride in Chuck Peterson’s Hummer. It was a really nice car. I like nice cars. I guess I’m going to have my pick of them now, just without the boys.

Oh well, easy come easy go. Hey—it’s not like I’m saying I’m easy or anything. I’m not. Definitely not—but still, I would have liked to go for a ride with Chuck—or Ross, or Greg, or Zach. I would have even taken a ride with Nate Elvin if I had to. I guess he wasn’t so bad, once you got to know him and got past the, well you know, that thing on his nose.
So I guess it’s just you and me, diary, and a whole lot of cafeteria food. After all, it’s my own fault for hanging out so long after school with Timmy Harrington. He said no one would bother us if we stayed out of sight in the back of the library. He said we’d have the whole place to ourselves once the janitor left for the night.

It sounded like a good plan, right? I just didn’t figure the janitor turning into a monster . . . or taking a bite out of Timmy’s arm and . . . well . . . I guess you can guess the rest of the story.

That’s why I’m locked in the cafeteria. I’m not roaming the school halls at night with Timmy and the janitor, and God knows who else, lurking around the math wing.
Hey – I wonder if any of the boys stayed late after football or soccer practice. Maybe they’re in the boy’s locker room right now? Should I go check?

FROM THE RAMBLING DIARY OF JANETTE GALLOWAY – ENTRY #2

Leaving the cafeteria was a really, really dumb thing to do. Contrary to what people think, just because I’m pretty doesn’t mean I’m stupid.
The janitor’s name is Mr. Fitzwilliam. He only has half an arm. I remember before I got to high school, I used to wonder which half, but then I met him, and realized . . . duh.

Mr. Fitzwilliam is married to Mrs. Fitzwilliam, the librarian at Littleham Public Library. I don’t think she likes me too much because I took out a copy of Harry Potter in something like fifth grade and lost it in my room. I think it’s propping up my Barbie House, but I’m not sure. Did you know that wheelchair Barbie can’t get through the door of my Barbie’s Dream House? It’s not wheelchair accessible. Someone should write to someone about that—if anyone’s left alive, I mean.

Anyway, every so often I get a letter from Mrs. Fitzwilliam saying that I owe like a thousand dollars in late fees for her stupid book. My friend, Karen Taylor, told me that I won’t be able to graduate if I don’t pay the fine. I don’t think that’s true. I hope it’s not true. I haven’t even read Harry Potter yet.
There’re too many words

Back to Mr. Fitzwilliam He was standing behind the cafeteria door when I opened it. He freaked me out and I screamed.
“Don’t scare me like that!”
Mr. Fitzwilliam said something back to me in Zombie, but I don’t speak Zombie. It sounded like, ‘Ugggg . . . uhhhhh . . . gurgle.’ I asked him to repeat himself, so he said it louder.

I don’t get why people think if you speak another language, we’ll understand you if you just speak louder. I didn’t understand him the second time, either.
Mr. Fitzwilliam tried to grab me, which is totally understandable, because all the boys want to grab me, but he missed because I think he thought he still had his entire arm. Timmy Harrington, however, heard me scream. He was moping around outside the cafeteria, too, probably because of unfinished business when we were in the library.

Too bad. Still, I had to go back in the cafeteria and close the door again. I’ve even dragged a couple chairs in front of it just in case, well, you know.

I wonder if there are any fruit cups here. I love cafeteria fruit cups, especially when they come in those big, yellow tubs. Some people might think it’s gross, but I don’t. It’s yummy.
I say ‘screw the diet.’ Fruit cup, here I come.

FROM THE RAMBLING DIARY OF JANETTE GALLOWAY – ENTRY #3

I don’t feel so good.

After all of those fruit cups, I have to go to the bathroom, but the girl’s room is out in the hall, and that’s where Timmy and Mr. Fitzwilliam are.
Still, my stomach really hurts. How much fruit cup can you have before you’ve had too much? Whatever the amount, my stomach won’t stop gurgling and the big trash can underneath the window is starting to look good.

I’m just not sure how to squat over it – it’s really tall. Hmmm.
Timmy Harrington keeps banging on the cafeteria door, I only know it’s him because it sounds like thump-thump, thump-thump, instead of thump-empty space where Mr. Fitzwilliam’s half-an-arm should be, thump-empty space where Mr. Fitzwilliam’s half-an-arm should be.
Timmy’s nice and all, but he’s still a zombie and I don’t know what he’ll try and do to me if I let him in. If it’s anything like what happened in the back of the library, he’ll try and do a lot.

Also, my cell phone’s on the fritz. I mean, it’s dialing, but no one’s answering on the other end. I’m not dumb enough to think that only Timmy and Mr. Fitzwilliam have turned into zombies, but I at least hope my mom is okay.

I’d like to say the same about my dad, but frankly, I don’t really care anymore. Ever since he married that Dottie lady, he’s been totally different. It’s like I’m invisible or something. It’s all ‘Dottie this’ and ‘Dottie that’. Well, what about ‘Janette this’ and ‘Janette that?’ I matter, too, ya know.
Mom said this is exactly how Dad would act once he married Dottie, but I didn’t want to believe her. Maybe Dottie will turn into a zombie, or get eaten by one, and things can go back to the way they were before the divorce. Besides, who marries an ex-lesbian, anyway? I didn’t even think people could switch like that. It’s not like we’re chameleons. Well, if she does end up as a zombie, she’ll be the only one out there with a mullet.
How eighties can you get?

Okay—reality check. I’m stuck in the Littleham High School cafeteria with a zombie custodian and another zombie that I almost did it with in the back of the library near where they keep all the literary books that no one wants to read, like The Scarlet Letter, and Lolita. Sure, there’s food and all, but I can’t stay here forever. I going to have to get out of here somehow and try to make it to my Mom’s house.

Hey—I know I’m a porker and all for eating all that fruit cup, but I’m sure I can fit myself though one of those windows over by the long tables where all the dorky kids sit. I’ve never really been to that side of the cafeteria before. That’s like social suicide.

Still, fruit cup or not, I’m sure I can fit through one of those windows if I really try.