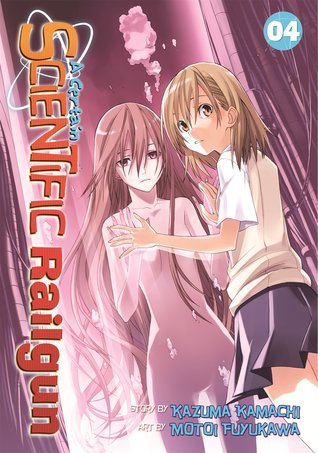 The Sisters arc is here! Boy, the manga moves fast as lightning. We are already on S2 material. On the one hand I am delighted with that, on the other hand? I think I prefer the anime more. Mostly because it fleshes out the characters more, it gives us more insight in the lives of Misaka and her friends. Now it just feels hurried, rushed, like the author just wants to go through all the exciting bits. 😐 Also there is just no calmness. There might be a few pages with some random stuff, but it is so so rare, and I miss it. It is what made me love the anime. Some people didn’t like the filler, but as for me? Especially now after reading this, I prefer them. Slice of life, some friendship, yes please.

Also it feels disconnected and off at times. For instance at the middle of Volume 7, we have a moment of reprieve, but actually it is more a build-up to the next arc. However, there are things happening there that we didn’t see, and which are just really weird. Kuroko got injured? Uiharu apparently had something to do with it? Suddenly Kongou knows Misaka’s name, while when we saw her last she didn’t know. After the final battle with Accelerator we find ourselves suddenly in the hospital, how did they get there? Did Misaka carry Touma? Or did the Sisters help? Again, I am sure it wouldn’t have hurt if you added some more scenes to make them connect better.

The Sister arc is pretty awesome, though even more than in the anime, I wasn’t happy with the way Misaka acted. Yes, we know the Sisters have your DNA, that you gave your DNA. But hello, you were 6 to 8 years old during that time. They should NEVER have asked you, and even if you gave permission they should have asked your parents/guardians to also get their permission. You are a kid. They need an adult as well. I am not sure about the laws within in her world, but it worries me.
But Misaka completely works herself to death because she feels like she is the one to hold the blame. She has some wonderful friends, Kuroko especially, who would be more than willing to help her out. I know that Misaka wouldn’t want Kuroko to get wounded, but come on, haven’t you got any idea how it would be for her if you died? Or got wounded badly?
I just wanted to smack Misaka on the head. On the other hand I also admired that she was so willing to go so far (and she was pretty awesome finding out all those things, fighting those people, fighting against the places that held the research), but mostly I just wanted to smack her for endangering herself so much, not relying a bit more on others.

I was delighted to see the Sisters, they are so much fun. With how they talk, but also how they see the world. I felt terrible with what happens to them, no one deserves that kind of treatment. 🙁
I do hope that with the end of this arc it won’t mean that we won’t see them any more. I do hope we will see them more, even a bit of a small hint to it would be nice.

The battles were pretty kick-ass though, and I definitely like the final boss battle.

What more? Mm, well I loved the Touma at the end of this arc. He never really is a big favourite of mine, but he does show a wonderful side (though also a bit stupid) to himself.

Accelerator. Well I don’t want to say anything about him. Bah! I think that says enough about how I feel about this character.

I guess I will have to get the rest of the volumes soon if I want to know what happens next.