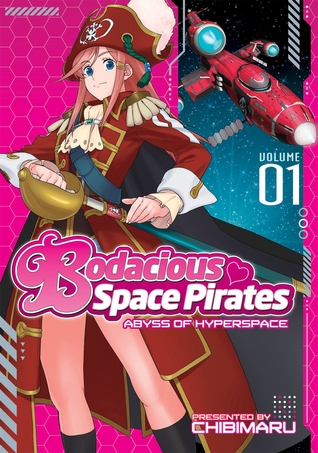 This was another one of the manga that I bought on Saturday.

And it seems that I will put this one on-hold, this series, as apparently this isn’t the same series as the Bodacious Space Pirates, but is instead some sort of extra story/side story/sequel. Which does explain why I was confused out of my mind when I read this manga.

I got the gist a bit, but mostly I was just lost and wondered what happened. It felt like I missed months and months of material.

It was still good, but I think I would have enjoyed it more had I know this was a side-story/extra story, and if I had seen the anime, or read the novel (not that will happen unless it comes out in English).

Still the story is interesting, the characters are great fun, and I really liked our captain, and loved that even with all that is going on in her life she is finding time to also be a pirate. She is really dedicated, and it seems she isn’t just doing it because it was her dad’s will, but also because she loves being a pirate.

I am a bit confused on the whole pirate thing, especially later when Kanata boards the ship and stuff happens. So not everyone knows that the pirates aren’t always bad? That they are acting as a business/entertainment? I would think that the whole universe knows about this, and not just the one where Marika lives. Otherwise it does seem very strange.

I am curious about the Yacht’s club and what they do there. It does seem like a fun club though, wish I could join.

The art is pretty great, and I love how many details there are, and how the characters are drawn.

So for now this one is on-hold, but I will definitely read it further as soon as I watched the anime.