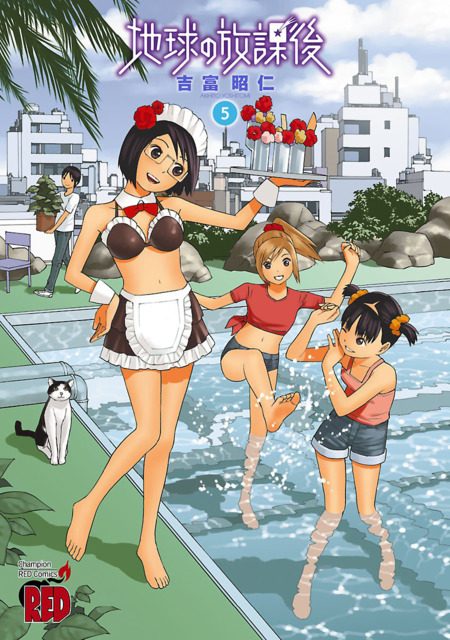 I have serious doubts that this one will end well. This is the 5th volume, there is only one volume to go. 😐

And really, nothing much happens in this one. There are some new theories, some new things happening, but actually it is just one or two chapters that have something interesting happen. The rest is them just having a great old time alone. I would think that with all these phantoms still around that one would try a bit more, now it often just feels like they don’t care that the world might be gone (or not, as that is also a theory).

And really, the fanservice, the never-ending teasing of Masashi, is getting a bit annoying and old. Who cares about who of the girls will get the boy, or who has the biggest boobs.

There is a whole world that is empty, and you guys just stick to the same place (which is nice, and safe, but don’t you guys want to know if others survived) or at least close to it. They did move a few times, but it feels like they don’t get anywhere. And that is a shame.

Like I said in the first sentence, I do wonder how they will tie up all the loose ends, there are a lot, and I don’t really feel happy if they will all stuff it in the last volume and then end it. 😐

So yeah, this one was a bit less. I hope volume 6 will be a decent paced volume with all the answers and maybe also some action. That would be lovely.