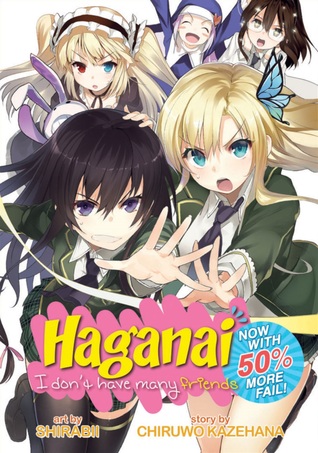 So this another one of the books that I bought during that amazing book haul of awesomeness on Saturday.

This one is a separate entry from the normal series, and it would also be recommended that you at least read or saw the series before you start with this one, as it does contain a few spoilers of stuff that doesn’t happen until later.

Most of the chapters in this book are character-related. We have Niku, Yozora, and well, the whole cast is passing by in this one. Of course during their own stories we will see the other characters as well, but they are the side characters.

It was definitely fun that they did it this way, I was already wondering how they would do these short stories, since that also varies per manga volume.

I think out of all the stories I like our trap’s story, and also the Rika story, the most. Rika is just funny, and I love how hyped she gets about stuff. Plus the confession scene was just adorable. Yukimura is just so adorable in their outfit and their need to be a true man. It was fun to see their story. Haha they are trying so hard. 😛

I don’t really get why their is a part at the end of the stories with a fail as text. Sometimes even 2 fails, and it was just weird and stood out. I kept going back to the stories, but I couldn’t find anything failure-worthy.

I still love the art and how the characters are drawn.

All in all, I also got several other volumes from this series thanks to that mega-awesome-book haul, so I will read those soon.