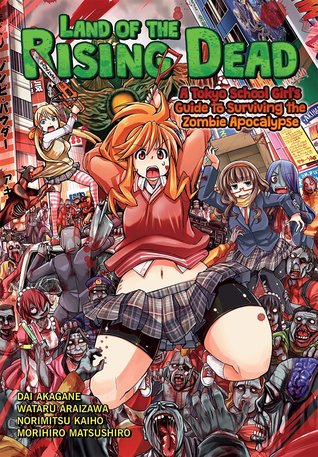 This was such a fun book, I am sure it will appeal to the zombie lovers (like me). 😛

Like with another review I wrote this will be a good/bad review. Sorry guys, I also don’t really feel well enough, but I do want to post a lovely review for a book that I really liked.

Funny story first, I thought this would be totally manga. I hadn’t read the blurb at all, I just saw this mentioned on various sites about manga, and so I thought this would be a guide about zombies with only manga.
Then the book came in (big!) and I found out that you will have a couple of manga pages at each chapter (to fit with what is told in the chapter), and quite a few illustrations. So I was a bit sad, but then I started reading it and I was in love.

Yes, it took me some time to read this (though in total time it is just a few hours), mostly because while I am used to manga being read from right > left, I am not used to books with text having the same thing. I hear you say, you don’t read LNs? Yes, I do. But in English those are flipped around to match the Western way of reading. So it took me a bit longer to read this one as my head was just screaming at me that I was reading this all wrong. 😛 Which meant I sometimes lost my way.

-1 star for the over-kill weapon (and oh yes, a few defence) chapter.
-0.5 for the weird ending and also repetitions in the text which got annoying.

Good:
-The manga chapters. They were a delight to read, to see the antics of our group. To see what they were doing, to see the zombies (they were drawn hilariously), to cheer for them to survive and to throw everything they learned in practice.
-The illustrations. The illustrations are definitely a fun thing, they break up all the text, and fit with what is being said at the moment. I laughed so much when I saw them, as often they had some hilarious situations.
-The chapters. The book is split in 5 chapters, and I loved they did this. Each chapter is about their own subject. From what zombies there are, to what they do, to surviving x and y. Some chapters were a bit short, and some were quite long.
-How it was written. It was written partly serious, but with a big pile of haha, hilarious flavour on top of it. I really like the way the author described various things. He didn’t sound like a know-it-all, he didn’t sound all teachery. No he sounded like a fun person who wants to show people how zombies work, and what works best against them.
-The characters. I loved each and everyone of them. From the bookish girl with the otaku tendencies, to the big-boobed girl who apparently seems to have lost most of what she has upstairs with her boobs (but she was still kind and friendly), to a tough tomboy who is willing to kick butt, to our resident zombie. Yes. Zombie. And no, this is not a spoiler, this is something that is mentioned from the start. 😛 I loved that they were so different from each other. Still I rooted for all of them! Survive!
-The cover. It is just so funny, and has so many details so you will just have to keep looking to find them all.
-The fact it was Japan-centred. Often it is US-centred, so I am delighted to read how certain things work in Japan, and to see how Japan would handle this situation. Also on the weapons part, it was long, but it was definitely fun to read about the laws in Japan, and how to find weapons with that strict law going on.
-There are some other things in the book that I also enjoyed, but I think this will become a long long review then, so I will keep it to the ones I mentioned.

The Bad:
-I am deducing one whole star for the fact that the weapons/defence chapters was so overkill. This is written in case of a crisis, but I am sure that no one got any time to check 70+ pages of weapons at that time. 😐
I got bored around 20/30 pages in, and then I found out I still had 40+ pages to go. You can imagine that I wasn’t amused to trudge through pages upon pages about weapons nobody every will use, or only will use when one is in a zombie game.
So what I would have done/a suggestion to make it better:
Make a top 5 of best weapons, and a top 5 of worst weapons. People can quickly glance at what is good and what is bad. No need to go through all those pages to decide on a weapon.
I would suggest the same with the defence part, but that one wasn’t that long, so I think that one is OK.
-I am also deducing a combined 0.5 stars for the ending (whut, why is this happening). It just didn’t make sense. I won’t spoil but I am sure that others might feel the same way.
-The combined 0.5 stars also goes for the repetitions in the text. The author would often repeat parts of the guide in other parts. And sorry, seeing the same thing over and over again doesn’t make it better for me. It doesn’t make me want to remember it, it just makes me frustrated.

But all in all, this was a wonderful, fun, hilarious, great guide on zombies. There is lots of information, and it was definitely done in a fun way. I will miss these characters, and I wouldn’t have minded a full manga volume about them and their lives.