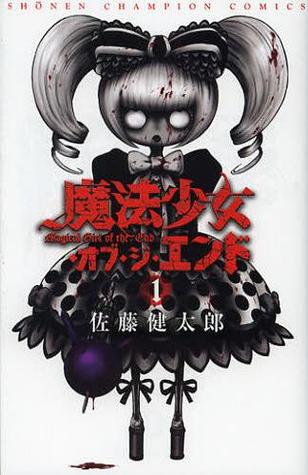 So I was looking around for something that had zombies, that was a bit like High School of the Dead. And then I heard this would be a good one.

So what do you get when you mix Mahou Shoujo with Zombies (as that is what I would call those in this one)? Well you get this. Say by to your world, the Mahou Shoujo are now taking over and brutally killing, maiming, eating everything and everyone in their path. No one is safe. Oh, also you might just be summoned back and become a brainless overly aggressive zombie.

The manga starts off all sweet (well, with the exception of the bully scene), and then suddenly blood, gore, and other stuff happens and our MC and people they meet have to run like crazy to survive. Then again, even running, or going in a car isn’t safe it seems.

As the story continues you see our MC try to save himself, but also the people who are still alive. I won’t mention names, because you really shouldn’t get attached to anyone in this manga. Really, I was just liking a few people and all of the sudden their heads exploded and they died. 😐

We also find out that some (all?) of the Mahou Shoujo are able to become a parasite and enter people. Yes, if you thought being screwed over by a Mahou Shoujo isn’t enough, just when you think you are safe suddenly someone you thought was a friend might attack you.

All Mahou Shoujo have their own strengths and weaknesses, though all of them can raise the dead. The people who touched their weapon when they got killed. Even creepier? They are now looking like the Mahou Shoujo and are just as aggressive. Also Magical~

The gore is exceedingly high, turning my stomach quite a few times, and I had to quickly go to the next page and hope it was safer to look at. The ways the people get killed vary from being bludgeoned to death, to being ripped apart, to well…. just read. That is one reason why I am not sure I want to continue with this one, and also was a reason why I am not rating this one that high. Really, the gore levels are Elfen Lied high (those who watched Elfen Lied will get the reference). Though as for now I mostly just want to continue as I want to know what is going on, who brought this project of death in the world, and who controls these Mahou Shoujo. I also want to root for the MC (hopefully he won’t suddenly die).

The art is pretty decent, though well, what is up with how Tsukune looks? Everyone looks quite normal (except for the girl with the way too huge to be real boobs, but more on her in a bit), but Tsukune’s face looks just weird and off. Like a kid, but then stretched on an adult’s head. She really stands out from the other characters.

Of course (sorry more horror manga I read seem to feature this), we also have a girl with enormous, wth this must be uncomfortable, boobs with of course a small body and you just wonder how this girl can walk, let alone run without just going face first all the time.

There is also a bit of romance, sometimes it doesn’t match, but in this one I quite liked it. It made the situation a bit less desperate. Hope that sounds as OK as it sounds in my head. I will definitely be rooting for our couples that are forming. Hope they survive this. Hope they will be able to get their happy ending.

All in all, I guess I will just give this one another try, maybe even two tries. Though from what I see this manga isn’t complete yet, and I am not sure if I can stomach it much more.

Would I recommend this one? Ummmmm, I am not entirely sure about that. On the one hand it is original and creative, and the action is fast-paced, the characters are good, but the gore is so high it is just disturbing as hell. 😐 So I guess the best I can say is determine it for yourself. Be warned, lots of gore.