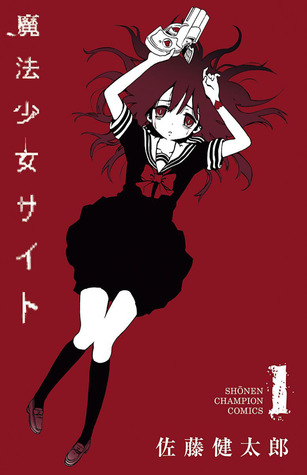 Wow, just wow. I think I will continue reading this series. This is a review for volume 1 and 2.

This is by the same author as Mahou Shoujo of the End, but it is way less gruesome and way less death and destruction. Sure there are still scenes that are WTF, and very disturbing, but in overall my stomach can handle this better than the MSotE.

Welcome to a world where unlucky, unfortunate girls can become mahou shoujos. Yes, this sounds like a recipe for disaster right? Give a girl who is so far in depression, so far in a mode of nothing else matters, a stick that can do stuff. A stick that might have a power that will go to their heads and well….

I also quite think the sticks are interesting. Each one has a different one, varying from guns to wands. Also the idea that you have only x amounts of power (or lifespan) before it is over, and that this is represented by a depleting heart, is quite interesting.

It was quite horrific to see what our MC has to go through. Horrific bullying, and not only at school, but also at her home. Her brother abuses her, hits her, strips her naked…. yep. Disturbing as hell. I just felt so so sorry for the girl, that no one helped her out. Not until she meets Tsuyuno.

Stuff also happens to the bullies (at least those at school), I won’t tell you what, but let me just say, wow. And Ouch.

Then there is also the end of the world, or at least that is what seems to be coming soon. The site on which they got their powers has some sort of cryptic message about something called the Tempest. Our MC and her new friend will have to find out what happens then, and how to prevent it, or how to at least survive.

As the story continues we see more answers, but also more questions. We learn about characters, backstories and all (almost everyone gets one). It really makes me curious. Especially the second volume, I am really wondering about that Admin person. What is her plan? Why does she want that to happen?

We also have some cray cray characters who either flipped because of their new-found powers, or because of something else.

The art is quite pretty, even though the disturbing gore parts are bit too much and have too many details.

I will definitely continue this manga, and also will be buying it when it comes out in English.