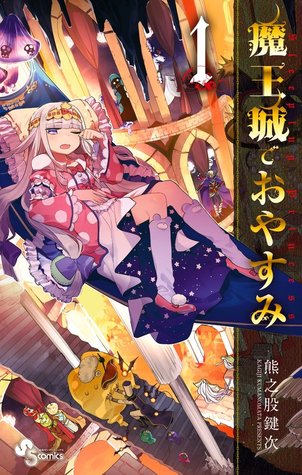 A princess, kidnapped by a demon king. And her quest to finally be able to sleep well.

Now I know what you will be thinking, the poor thing. Is anyone going to save her? How will she survive? Well, um, throw out all those ideas, and just worry about the monsters and the demon king. 😛

Yes, our princess isn’t so weak, so silly, instead she is awesome, and she is a danger to all the critters in the castle. She is on a quest to sleep well, and she will do anything for it. Including cutting up living blankets, brushing demon teddy bears until they drop their fluff, cutting off capes, stealing precious artifacts, and so much more. Every chapter features a new quest, and the hilarious situations that come with it.

Did I mention she keeps dying? Yes, in her quest for new stuff to sleep better she keeps falling into lava, or falls asleep on deadly mushrooms.

The girl is totally awesome, and I actually don’t want her to be saved. She is just too fabulous and kick-ass. She totally isn’t afraid of the monsters.

In the meantime we see the humans still trying to save the princess, and the demons making plans to thwart the humans. 😛

If anything, I agree with a comment I saw somewhere, that someone should save the demons, and the demon king. Before they get killed any further.

The art is pretty awesome, I do love the style!