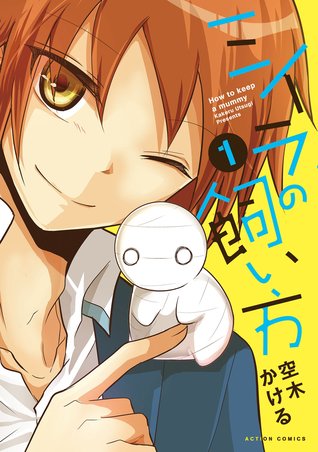 Review for volume 1 and volume 2!

Warning: This book may cause death because of cuteness and sugar overload. 😛

Yes, this book is that cute. It is about a guy whose father is an archaeologist and who sends him a sarcophagus/coffin. At first our boy thinks there is this huge, big, giant, mummy in it, but then instead there is a tiny little, adorable as hell, mummy in there. The little guy can’t say much, but he can make his intentions clear.

Our MC isn’t sure what to do at first. But then he falls (just like everyone around him) in love with that tiny mummy, and wants to take care of him. Even going so far as to take him to school. Yes, to school. Why? Because Mii-kun just seems to dry out when our MC isn’t home, we find out later why that happens. (Hint: It is adorable.)
His best friend (who knows about the mummy) tries his best to help him during the school parts, as Mii-kun can’t always sit still all the time. 😛

The manga follows the adventures of the MC and our little mummy, and also tells us (in bonus stories) a bit more about Mii-kun, and also other characters. A delightful little slice of life with a cute mummy who slowly finds out about life, falls in love even further (and even has some delusions, Mii-kun vision is hilarious, if only our MC knew) with his owner.

We don’t only see our MC, but also the mummy gets a few chapters were we see things from his POV.

The aunt is hilarious, especially when she puts on her glasses, or when that happens accidentally. Poor MC, poor mummy.

Mii-kun is absolutely adorable, I love how he keeps on trying new things. I had such a laugh when he got out of bath and was totally bloaty and didn’t get back to normal until he was dry. I am also kind of glad he can’t talk. I have seen enough cute, sweet, tiny characters who were cute, then started to talk and totally got ruined because they turned out to be demanding, annoying, frustrating, or spoiled.

The only thing that I didn’t particularly like was the art. It just isn’t that pretty. Yes, the covers are lovely, yes, most of the one page illustrations are good, but the story parts just feel hurried. Bodies that don’t match, faces that look weird, and several other things.

But all in all, I totally loved these 2 volumes, and I will be eagerly waiting for the rest. Until then I can recover my sugar and cuteness levels, they are just too high at the moment. 😉