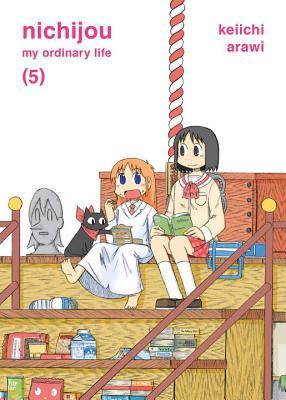 Though I do have to say that some of the jokes fell flat for me. But then again that is what happens with Nichijou, some jokes are just not fun. Or at least not my kind of humour.

I also do have to say I was pretty pissed at Mai and Yukko and how they treated Mio’s manga. Yukko just screwed it all up, Mai just drew crap on the backgrounds. Really, maybe it is meant as a joke, but sorry, I don’t see what is so funny about screwing with your best friend when she asks you for help. 🙁 I just wanted to hug Mio and tell her to just dump those “friends”.

Poor Sakamoto who loses his scarf to a crow. 😛 He could have seen it coming though. He should know by now how the professor is. How she is so childish that she will just do anything even if it might hurt others.

Then we have the teacher who is in love with another teacher. I had a big laugh when he accepted that bribe just because for that one thing. 😛 He is a bit stalkerish though, maybe it would be better if he was just honest (then again, he does tend to clamp up when he gets near her).

And then we have the continued efforts of that one teacher to get Nano. And how she keeps falling for her own traps. 😛

But all in all, I did laugh a lot during this volume. I still love how overly exaggerating everything is, how anything can happen no matter how silly, no matter how weird.

I can’t wait for the next volume to come out.