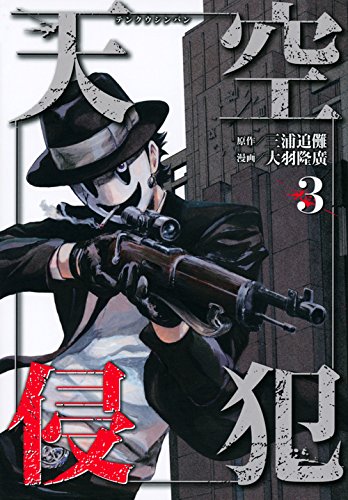 With each passing page, with each passing chapter, I love this series more and more. I just want to know more. Maybe I should just wait until the manga is completed, because I probably can’t wait for new chapters to come. 😛

In these 3 volumes there is a lot of death (of course, because that is how the world, and the masks, work), but we also find out more about the different masks (You have 4 types so far, emotionless, angry, happy, and faceless. (The last one is apparently a special one.)), and also meet new people, though again, like I said in the previous review for Vol.1 to 3, you shouldn’t get attached to them. This world is not kind, and anyone, even if we have only known them for a few seconds, can get killed, or commit suicide.

Not only that but we finally meet Yuri’s brother, and see how it is going for him. We see him talk to his sister, discuss plans. Yuri’s brother is awesome. I wasn’t all too sure about him in the beginning (when he asked her to do that), but then it turned out he was a good guy.

We also have another new team. The sniper guy and a girl who apparently can do some pretty kick-ass stuff and is apparently immune (she is closer to God). It was a bit of a strange combo, we we do see that the Sniper guy isn’t that much of a baddie after all.

We find out several things in these 3 volumes, and I can slowly get a better understanding of this weird, strange world. Though of course there are various questions that I still want answered. How do people get to this world? How are they chosen? Why is all the death needed? Why is the groundlevel forbidden? Who made this world? How are people chosen to be closer to God/God? And so many other questions. I just want to know more and more, and I love that. I do hope that we will get all the answers as the series continues, for now it is still ongoing, so I guess there is hope.

Nise and Yuri, I just love them together, and I am delighted that they found each other. I do worry for Nise though, I won’t spoil anything, but read, and I am sure you will worry too.

Yuri, just like I said in the previous review, I do find it a bit strange that she knows so much about guns, that she knows how to handle them. But also strange that at times she acts like she was in the army. It just feels out of place. One moment she is defenceless, the next she is kicking butt like she never did anything else.

It seems the world doesn’t discriminate on age, or sex/gender. We have seen kids, we have seen older people. It is quite interesting, though of course it makes me more curious on how this world works.

Also just like in all books/media like this series it is clear that often the humans are the biggest threat to fear.

As I also read in comments, and I agree with it, the art is changing. It does seem more cute than it did in the beginning. It isn’t a bad change, it is actually quite nice.

What more? Mm, nothing more, I just flew through these 3 volumes. Before I knew it I was at Volume 6. 😛