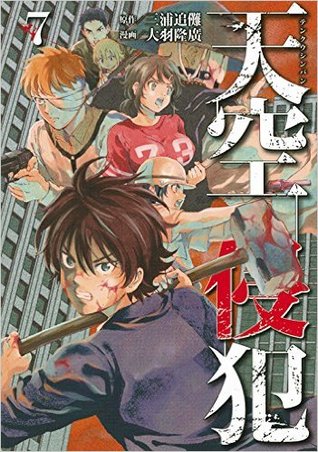 Wow, wow, and wow. So much keeps happening in this manga, there is never a moment of requiem.

These 2 volumes are about Nise, about Yuri’s brother’s team, but also about the Sniper Mask and what makes him tick.

I was a bit frustrated about how the Nise situation was handled. It felt rushed and hurried. Up to the point she was having hallucinations, and the moment when everything came crashing down was handled well. It wasn’t instant BAM, but a process that took a bit of time. However, how it was solved in the end? That was hurried, and it felt like the whole hibernation thing was just nothing. I know, I know that girl that helped out in the end can do x and y, but really? It just felt like a cheap trick, especially with all the build-up and the resolution of Yuri.

Yes, the whole build-up to the point of hibernation was perfectly executed. It was quite interesting to see Nise try to fight it. To try to battle it. However, and it is something I often see in manga, people should really just trust each other more. I see the same happening in zombie manga or books. Characters who are wounded (either bitten, or just a bad fall) who never tell their team members. This is just not good. You are in this together, you are in a life or death situation, you need to be effing honest with each other. Do you want the other to go down as well? I know she was doing it as to not worry Yuri, but come on, even a blind person can see it is not going well. 😐

I am quite curious as to how this whole situation will be handled now. Nise who is potentially a danger, but also a great asset.

We also have a backstory on the Sniper Mask, and some vague hints to his origins. (He seems to know Yuri’s brother, so a friend? A dad? Maybe someone else?) I did feel terribly sad for him that he was forced. 😐 Stupidity of wearing the mask is one thing, but being forced? shivers Some people are just that sick I guess. 😐

We have a new band of villains, and possibly even more as they are being controlled by someone. Boy, these new villains will sure bring trouble, I do worry about our teams, especially Yuri’s brother as they are targeting him. The showdown in volume 7, and of course the cliffhanger that came with it. Wow, those masks sure planned it well, or well, the one pulling the strings on the dolls is. I am curious who that person is.

I do hope our teams will be all right, and that Yuri’s Brother team will meet up with that one guy. Who is now without masks, so I hope there are no sneak attacks.

Yuri also levels up. Sorry, couldn’t resist. I really loved what happened there, and how dedicated she was. I am not sure if I would do the same (I think I would, though my fear of heights is significantly bigger than Yuri’s fear of it). I can’t wait what this means for what will happen next.

I am also curious as to how Yuri will act when she finds out who saved Nise. I think this will be a fun meeting. 😛

I was a bit pissed that the Sniper Mask and that girl would think that Yuri just dumped Nise like that. Really? You know how Yuri is and you just think that? What? Why?

All in all I really flew through these 2 volumes, and I will definitely fly through the 3 remaining ones. After that it is the waiting game again!