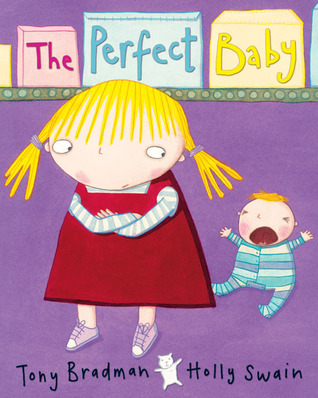 Fun idea, fun beginning/ending, but the middle part was bleh and boring.

What I expected from the blurb on the back: A little girl gets a little baby brother, doesn’t want it and goes to do a swap. This to me sounded like the parents wouldn’t be involved, like the parents didn’t know. Like the girl secretly takes her brother and takes him back.

However what I did get was some absurd story of a girl whose parents are totally OK with her trading her little baby brother like it doesn’t matter. And then we get all sort of animals (yes, animal babies, not even human babies), and you can just guess how that ends. Once is fun, twice is OK, but after the third time I was wondering why the parents still went along with it. If it was my kid, and my daughter had a problem, she would just have to live with it.

And that was also another problem, I don’t really get why the parents didn’t do or say anything but just let their kid do all that?

The ending was, as expected, cliché, but I was still liking it. Happy that it ended like this.