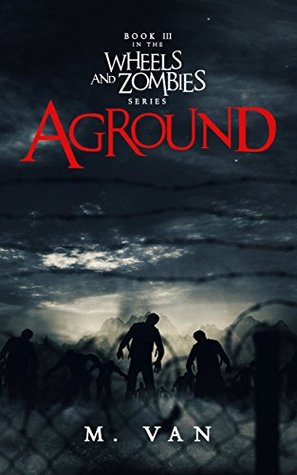 I was so delighted when I found out this series had a book 3, and I even heard word of a book 4. I just had to read it so I immediately went to buy it. I just had to see what Mags, Ash, and all the others were up to, and how they were doing. If the world was going down further, if the zombies got any worse.

This one takes place not that long after the second book events. We see our two girls making their way through the world. Trying to get through zombies, try to find a place that is safe for them. I loved how they still seemed to be doing really well, how each of the two seemed a bit healthier, a bit happier at this point. They both deserve a bit of quiet and easy time.

While the book doesn’t have much OMG creepy zombie moments (like with many other zombie books) (because our girls are still immune, at least well.. no I am not saying anything more), it did have some normal zombie moments that one would encounter in a zombie apocalypse (like them helping out people/saving them from zombies, taking out zombies because they are in the way, and some other zombie stuff), there was enough action elsewhere. They are still hunted by that annoying, creepfest of a Dr. Warren. Which brought its fair share of stuff happening.

I definitely loved the romance between Mars and Mags (plus I loved the reactions of Ash and Angie), however I was pissed at Mags for what she did to Mars. He is such a sweet guy, and he is more than willing to help her out with stuff, talk with her, but she is just pushing him away. Like she did in the beginning with other stuff (her family, her friends). I just wish she would get some balls and be an adult for once. Running away isn’t always bad, but in some situations…. I just wanted to smack her on the head for this crap. Yes, he did lie about stuff, but that was for very good reasons (no, I don’t think lying is good, but he had his reasons). I do hope that in the next book she will talk more to Mars, be honest with Mars, and try to build up a good relationship, because you can still have that even if you have those things that Mags has.

We also have Dr. Warren’s POV chapters, and I just skimmed those. I don’t want to read about that guy, he should just get eaten by a freaking zombie already. He is a terrible human, and I can’t understand why there are still people supporting him and what he wants to do.

I also wasn’t amused with Mags father, he endangered her so much. I know, he didn’t know about it, but still, it was a bit annoying that he would just accept anyone’s help. I know he wants to see his daughter, but he has to be a bit more careful in the future.

Angie and her predicament? We already know of this from the other books but I still was heartbroken to see her get worse. 🙁 With what happened later, I was happy, but also so sad, I could just feel her pain and despair, thinking she might not make it. I was rooting and cheering for her.

The later parts (and what happens there due to what Mags did) was awesome, but also quite heartbreaking. Poor Mags, she never wanted this to happen, it happened yes, but I feel it isn’t totally her fault. She was just defending herself, her friends, her lover, and forgot about what would happen if her blood mixed with someone else. 🙁 Of course I still won’t talk it right, but I do hope that she is able to forgive herself, that she will be able to move on, a bit wiser, and hopefully it won’t cause her too much pain. 🙁

I do have to say that while there wasn’t that many creepy zombie actions, that the new zombie was definitely a big NOPE NOPE and more NOPE. The shambling, never-stopping, they will find you, zombies are already scary, but this is really step above that. shivers

I am glad that Mags finally was able to contact her family, and is contacting them regularly when she can. It took her some time, but I am glad to see her opening up to her parents and family.

I quite liked that we saw how the rest of the world (especially my country as Mags is from the same place) is faring, and how they are trying to stop the zombie apocalypse.

There were a few small errors/mistakes in the text, sometimes I had to double read a part to understand what was being said.

Phew, this review got quite long. I think i have everything in here that I wanted to say. I would really recommend this book to everyone, and also this series. I can’t wait for the next book to come out.