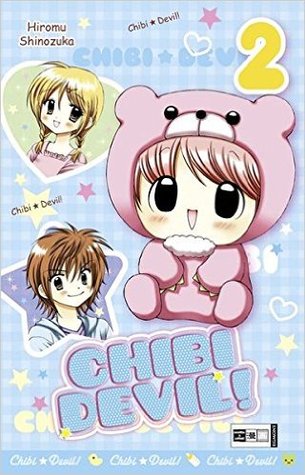 The second volume came in, and I immediately dug in to read it! This was another enjoyable, hilarious volume with tears, happiness, Mao-chan, and much more.

Most of the volume was stuff that I could still remember from the anime, but I didn’t mind, the anime ended quite some time ago and I was just delighted to see our characters again. To see the story move along.

In this time a lot of things happen. Honoka’s aunt pops up, Honoka realises her feelings for a certain person, the agreed month ends (it was quite sad because they had totally forgotten they had said they would only take care of Mao for a month + where did the month go?), Mao-chan grows up a little, and makes mistakes. The whole volume is packed full and I have to say that I cried at that part in which they have to leave Mao-chan, but then x and y happens and I was just so delighted. Of course I knew the outcome, after all there are 9 more volumes + a whole anime, but still it was so beautiful to see Honoka make that decision.

I didn’t particularly like Shiori, and I don’t think I ever will. She is just such an ice queen, always making blunt, harsh remarks. From what I remember she might melt a bit, but I know that I never quite got to liking her. Same goes for her baby, Rai. I don’t know, he had his funny moments, but he was a bit too stiff and bland for my liking and his jokes weren’t funny (though his face was when he did pranks).

We also got to meet Honoka’s aunt, and also saw what stress that brought to her. Luckily I think she will have a lot less stress in the future now she has finally been honest with her aunt. Good job Honoka!

Shin is also starting to be a favourite (just like in the anime). I loved (and laughed) when he got busted with that Papa guide book he bought. 😛 He was truly sweet towards Honoka, and he did a wonderful job on the parenting part.

The art is also still oh so much fun to look at. Definitely a lovely style.

What more? Mmm, ah, yes, I didn’t have any interest in that story at the end, the one about pudding? It was just a bit too weird, and I would rather have seen a short story about Mao-chan and what he does at the kindergarten, or a day from his POV.

But all in all, I got volume 3 and 4 ordered, so I am waiting for those to come in soon (probably next week), and I would highly recommend this funny (and adorable, oh and cute) series to everyone.