Well…. this sounded more adorable than it actually was. 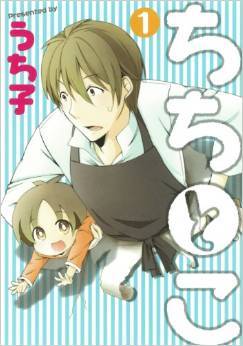 Sure, it had a few funny, hilarious moments, but mostly it was a tad bit boring, and the characters and their stupidity just annoyed me. I also didn’t like how we just get put in the midst of a story without getting any background or information.

So the dad is ex-yakuza? Or something? He doesn’t look like it, though there are enough hints to a violent past (he said he broke 82 people + he has a battered bat). Plus the fact that someone he saved has the utmost respect for the guy and is praising him left and right.
How did the dad change to be this what he is now? How did he turn into a good dad with a good job?

Also the mom is missing? Travelling somewhere? I just think it is a bit mean of her to just leave like that. To just leave her man and her kid alone. Never calling, except to ask for help (because she gets lost all the time). I also don’t really get how anyone would get lost that badly.

I liked the parts were the dad and the kid were together the most. That followed by the dad himself, and then the kid alone. The kid was just enormously dumb. I know he is a kid, but really, some stuff is just common sense even for a kid.

The art is so-so. I am not sure why the kids look so vastly different from adults. It is rather like they are chibi-versions instead of actual kids.

All in all, this is one series that I won’t be reading any further. The idea is really great, and normally I love stories about kids and their parents, but this one? Not so much.