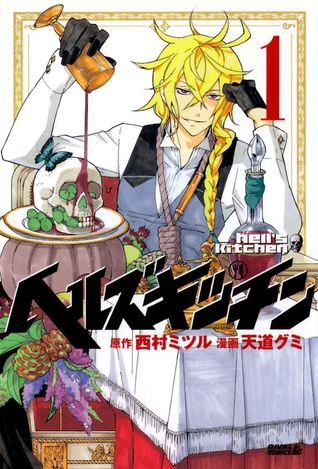 I was still in a mood for manga about cooking/baking/etc. when I came across this one.

An unfortunate guy, our MC, has a delicious soul and gets a visit from someone from hell who has determined our MC is going to be his meal. He first needs to become a chef though, a top chef. And thus the story begins. Our MC is getting into a lot of trouble because Dogma likes to take over his body at inconvenient times and Dogma isn’t that nice. 😛 You can imagine that our MC doesn’t make many friends because of this.

I am not sure if I like Dogma that much. I know he is from hell, and he is supposed to be evil, but really? I hate his attitude and what he does to our MC. He wants the boy to become a great chef, yet I fear he will kill him before that happens with all the violence he does to the MC.

I did like how our MC was a pretty average guy with no big dreams. Even through everything he remains pretty calm, though you did see him change. He made a big decision, something he never thought would do and I was happy for him. He deserves something better in his life.

It definitely has that Shokugeki no Souma feel to it (yes, even though this one came out years before the SnS manga, that is because I read SnS quite some time ago. Had I read this one before SnS I would have said SnS would have this manga’s feel). Not only the way people react to food (like they are getting an orgasm), but also the school part.

The art is pretty decent, at times it was amazing (those details!).

Probably will continue, not sure yet though. Again, Dogma is a bit too annoying for my taste.