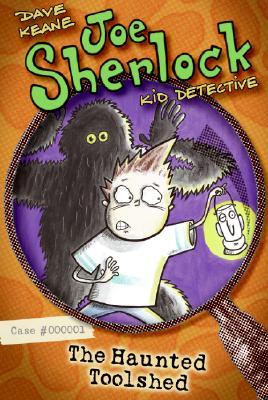 I came across this series and I immediately wanted to read them. I love mystery books, and children’s mystery books are definitely my favourite kind.

The book is about a boy named Joe Sherlock, who is a detective. Yes, I know, a bit lame, but mostly it was funny that his name was that. 🙂 He apparently has been solving mysteries for a bit of time, even though this is the first book. I have to say it was a bit confusing, as it felt like this was a book further in the series. There were several instances that I was wondering if I missed something, and I kept checking back to make sure that this was case 1.

While Joe was quite a nice kid, I do have my doubts about his intellect, and if he may or may not be a giant idiot. He didn’t even know the basic words (like poltergeist or ruckus) that most kids his age would have learned already. Then he kept falling over, being afraid of everything and anything, and sorry, I just wanted him to get a bit stronger and smarter.

But he did his best, never gave up on the case even when he was afraid. I liked that he went on to solve the mystery, I thought he would give up halfway. Or just let his little sister do everything.

The mystery was solved a bit too easily, too much BANG suddenly here is a solution, but I did like what/who the actual culprit was. I was happy for all the parties involved. The ending and what happened there was really nice.

I also liked that next to the mystery we have the whole dad and what happened to him and why he isn’t doing anything, though I am still wondering how he got out.

The little sister? I do hope she doesn’t get a lot of spotlight in the next books. Man, she was so annoying. I don’t mind a smart character, but she liked rubbing her smartness everywhere, acting like she was all superior (a bit like Hermione), like she was the best one. Bleh.

There are also illustrations throughout the whole book and I definitely liked that they were added. They made the story even more fun, and the mystery even more mysterious.

Of course, this being a book with a boy as the MC, it has farting jokes. 😛

But all in all, a pretty decent book, and I will be checking out the next books in the series to see if they get better.