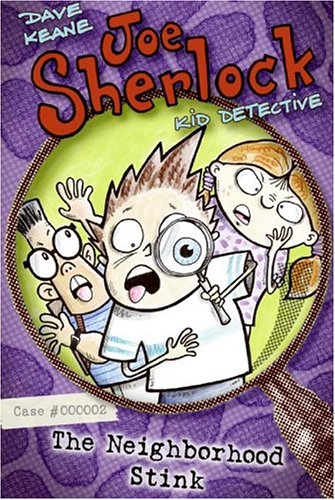 Well, this was quite a disappointment. I was annoyed with the characters, with the story that wasn’t related per se to the mystery, and how the mystery was solved.

I have decided that I am not going to continue with this series. The first book was decent with 3 stars, but I can’t give this book more than 2 stars.

The mystery idea was quite fun, though also a bit icky. We have a mystery pooper, and who can it be? Sherlock is on the case, and he is going through a big list of all the dogs in the neighbourhood, holds a stake-out, runs away, finds clues, and much more. I have to say I did like the mystery part of the book. If only all the parts that weren’t related to it were cut out, then I would probably have rated the book higher.

Sherlock is still an idiot, but I liked him a bit better in this book.

I already disliked Sherlock’s sister, but well I can say, I dislike her guts even more now. Who the hell gives her brother a peanut sandwich when that brother is ALLERGIC to it? What the hell? Do you not know how dangerous such an allergy is? 😐 Not to mention how annoying she was. How she kept bugging Sherlock. How constantly whiny she was? Bleh.

Lance was also terrible, we see him for a little bit in the first book, back then I could agree with him, it was late, I wouldn’t go out either. But in this book? I am doubting their friendship. Are they truly friends? Or are they just classmates? If these 2 are friends? I will eat my socks.

The illustrations are definitely my favourite part of the book. The style is so much fun, and fits exactly with the book.

But yeah, all in all, I am not going to continue this series. Good idea, but terrible characters and magical solved mysteries is just not my kind of thing.