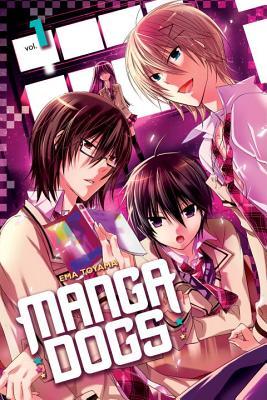 Short review for the complete series (all 3 volumes).

Another one of my bargain hunt manga volumes. 😛 Well, at least 2 and 3 are, I had to search for 1 so I could read this series.

The series about a mangaka, well, she just started and just debuted and is pretty much doing badly, named Kanna. She starts with a manga course at a school, and meets 3 hot, but very stupid and annoying guys. And thus the adventures of this group begin.

I have to say I was a bit annoyed with the guys at first. The first volume especially I just didn’t like them that much, though I warmed up to them, and in volume 2 and 3 I just liked them a lot. They were still idiots, they were still annoying Sensei, but they were also sweet, helpful, determined, and wanted to help Sensei and make their dreams come true as well.
I also loved how much difference there was between the three of them. Yes, they were good looking, but each one had a totally different personality.

Kanna, well I did like her, and it was quite interesting to see her work on her manga, but also see how she handled things like covers, her manga getting compiled, see her try to get her manga not get cancelled (then again, I wonder why it wasn’t cancelled sooner). Sorry for that last part, but we do see a bit of her manga, and it looks badly drawn at times, the story is terrible, and I just can’t imagine that this has been going on for months, and even caused her debut. I guess that is the whole point though, as the only ones who truly like the manga are the guys. And they just like it because they like Sensei, and they are impressed she reached so far already.

I was worried there would be romance between the guys and the girl, but thankfully that doesn’t happen (sorry all those who were looking forward to it). The girl is totally not interested in 3d, only cares about 2d characters, even celebrating the birthday of one 2d character.
And even if she cared about guys in real life, she probably wouldn’t have glanced at the guys. She finds them mostly annoying and thinks that they are idiots (which they are).

I am not sure who thought a manga course would be a good idea, and I also expected a bit more from it, but instead it is mostly them doing nothing at all. 😐 I had hoped for lessons, for some information, for some fun things, but instead it was just bland and not there.

Still I liked the story. Still I loved the characters. Still I quite like the art, though it was a bit rough at times, and the eyes especially creeped me out at times.

I did enjoy this series, and I can imagine why it is only 3 volumes. The story is complete, the story is done. They could continue, but I quite liked how this one made the circle (that started at the first volume) complete (considering the story she now has to write/draw).

I would recommend this series if you are looking for a silly manga about manga. And if you don’t mind annoying characters. 😛