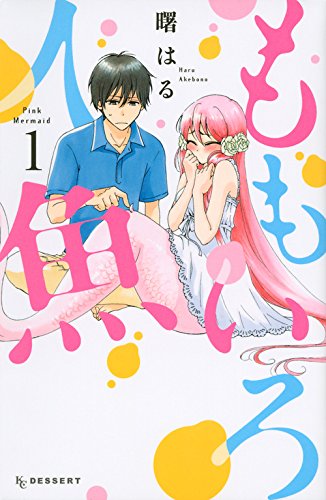 I saw this manga some time ago and wanted to read it. Alas I didn’t have much time, nor could I find the whole volume, so I had to wait.

But now I finally had a chance to read it! And I loved it. The chapters are quite short (10-15 pages each) but each is filled to the brim with hilarity and some ecchi-ness. 😛

Yes, the manga is in a way quite ecchi. Not because you see much like how ecchi stuff is normally done, but our mermaid is quite perverted and wants to have sex with her boyfriend quite a lot of times. However, there the twist happens. Each time she thinks sex thoughts, or gets too heated, she loses her legs and turns into a fishtail again, as opposed to her legs (which she got thanks to a potion of her elder) which she normally has. I guess she should have listened to what the elder had to say, as she just grabbed the potion and swam away to meet with Riku. 😛
But you can imagine that this gets quite funny as of course no one can know she is a mermaid. But since our mermaid is oh so perverted it is quite a cause of concern for Riku. One time he even had to carry her away in a garbage bag to not have people find out.

I do hope though that eventually the two of them can do more than some fleeting thoughts, and maybe a few stolen kisses, and a few hugs here and there. It would be such a shame if these 2 can’t do more than that, especially since they are quite cute together.

There is a whole backstory to how these 2 met, and I guess it might also have been the reason why our mermaid is so ecchi, then again, given her sister… or her sisters/brother it might have just been something in the family.

I do love our mermaid Run though. She is a cute character, with a bubbly and friendly attitude. She is sweet towards Riku, but is also very much open to meeting new people, even if she finds it scary at first. For instance with the astronomy club she quickly made friends with several people there, and it really was like she has been there since forever.
It was quite funny that she remember to cover her boobs (because of what Riku said back when they met) but then doesn’t cover the rest (which is logical considering she is a mermaid), but in human form it caused some laughter/weird looks because she didn’t cover anything else but her boobs. 😛

Riku was also a fun character, though I don’t really totally get the attraction that Run has. Frankly? He seems boring, and more like a brother than a boyfriend. At times you do see the boyfriend peek through, but often he is more concerned about her secret coming out. Plus I would like to see him think a few more ecchi thoughts, now it seems Run is doing all that for both of them.

The art is really lovely, I do love how the characters, especially Run, have been drawn. It is a nice style and it fits perfectly with the story.

All in all, this manga will make you laugh so hard, plus you will be rooting for Run! I can’t wait to see more background on Run’s family, and of course I am hoping hard for Riku and Run to finally be able to do a bit more in their relationship.