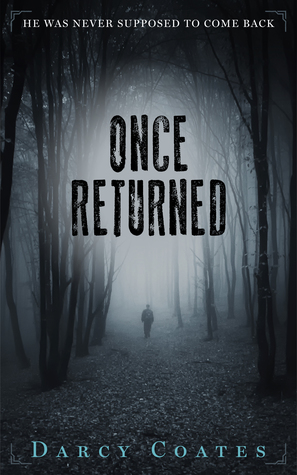 I am in a real Darcy Coates mood, too bad I am now through her books. This one was one of the last 3 I still wanted/had to read, and it was a great read.

What would you do when you supposedly dead husband suddenly pops up outside of your door after 2 weeks of him disappearing? What would you do if you husband isn’t the same man as he used to be? How far will you go to find out?

Our MC in this book lost her husband a few weeks ago in the Harob Forest. He was hiking, stuff happened, and he was never seen again….. or that is what she thinks, until a few weeks after the accident he suddenly on her doorstep. Looking dirty, looking pretty bad, but still your husband. I just felt so happy for her, but I was also immediately distrusting this guy. No way that her husband could have survived. Not if they searched so intensely for him.

Our MC also quickly notices that her hubby is a bit different from what he normally is. He looks the same, he feels the same (well except for being very cold). But he doesn’t sound like him. He is much more aggressive. And there are other keypoints that are different.

It was amazing to see how it went from happiness (though a lot of distrust and fear as well) to OMG I need to save my kid and my mom, and myself (if possible). We quickly see that Jon isn’t who he is, that there is clearly something disturbingly wrong with him. Also around the same time that Jon gets back people start disappearing.

But what is wrong with the hubby? Well we don’t find that out until much later, near the ending. Sadly, I was quite disappointed with that ending. I am still not sure what the hubby was, or why it was killing (though I am guessing for the same reason as that he wanted to kill the MC, she stepped over his body, she didn’t care to search harder (though she did. :|)). The story just ends with an epilogue, and I was all the more confused. What was going on?

But all in all, this was a short, but oh so awesome short book that I will definitely will be re-reading some day again.