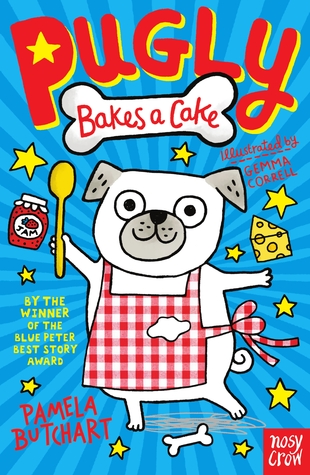 I already heard of the Pugly series some time ago, but never had a chance to try it out until yesterday. And boy I am glad I finally had a chance because this was just adorable. Yes, I had some issues, but mostly it was just love.

The main character is a little pug named Pugly. Pugly wants to be the most loved pet in the household, and so he decides to make a cake. Because then he could get on TV, become famous, and make sure his owner loves him the most.

Sadly this little pug doesn’t have a huge brain, better yet, he is an idiot. He falls for a plan of the other pet, the cat named Clem, and doesn’t notice that maybe putting all these ingredients in is a bad idea. The other pet, a goldfish named Clive, tries to help, but yes, Pugly is an idiot. His brain totally fries when Clive pretends to be dead. It was a hilarious part though, though I did feel sorry for Clive. 😛

A lot of hilarious situations happen, and I just laughed my butt off. From getting stuck in the catflap (how you even do that), to a rather fancy dog with a big ego, to a surprising, but nice ending.

Clem however is the one part why I rate this book a 4 star. She was a terrible character, and I hated how she tried to either eat Clive, or ruin Pugly’s plans. 😐

Also that pee part was just no.

If there are other books in this series I will definitely check them out, though I hope that Pugly gets a bit smarter.