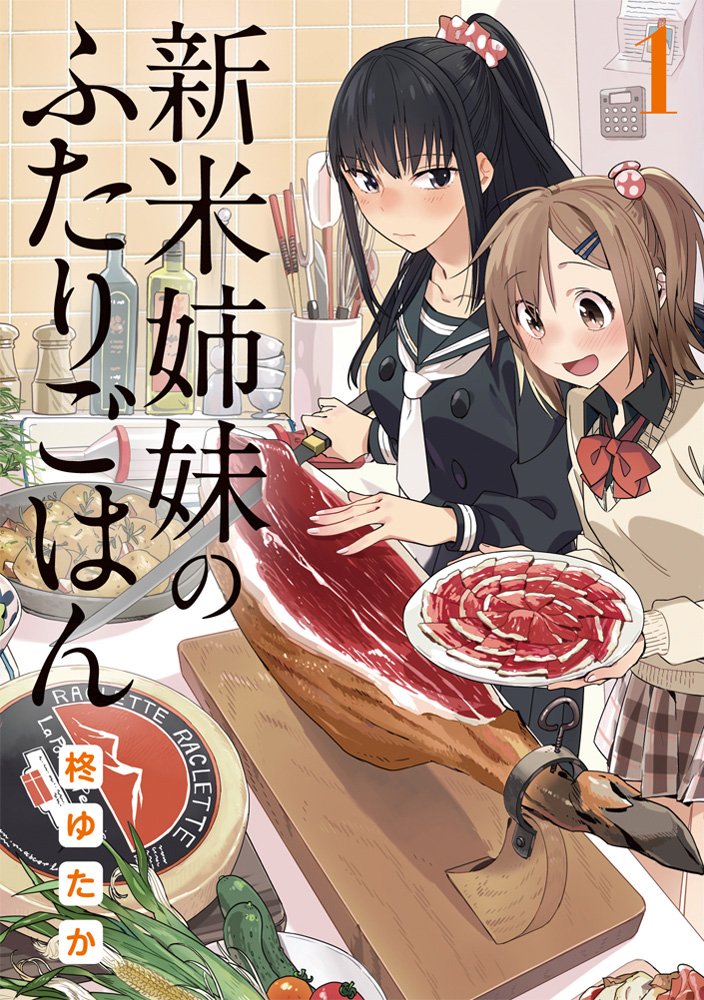 This is such a delightful manga, not only because it is fluffy and cute, but also because the food looks oh, so delicious that you want to eat it right off the page.

It is a manga about 2 girls who recently became sisters and have moved to a new place while their parents are away for their honey moon. The girls try to bond, one of them trying to be the older sister (yes, even though they both are the same age), trying to help her out. They are both polar opposites. While one of them is good at studying, is outgoing and has many friends, the other sister is shy, at times nervous, introverted, and prefers cooking or reading books.

It was really fun, and interesting to see them get along, to see them find out more about the other, try to live together. I was also delighted that they seemed to get along so well. Often in books about sisters who recently became sisters (hope that makes sense) it is struggle and arguments, often also awkward moments. These 2 have some awkward moments, but mostly they get along perfectly fine.

It helps that one of them is a great cook, while the other one wants to learn and eat all the food. Most of the manga is about them connecting over food. The food is of course delicious, perfectly done, and thanks to their parents (their dad especially loves sending presents) they have some delicious things to try out.

The way they ate food is a bit like Koufuku Graffiti. Just watch that and you get what I mean. 😛

BUT, I was still amazed that they had the exact equipment for the 2 food items that came in. I don’t know about you, but I don’t have a raclette oven, nor do I have a giant knife to even cut it with. I never even heard of an oven for such things. Then there is the ham, for that one too they had the right equipment. It was just a bit hard to believe. Even with a girl fanatic about cooking I just can’t believe she had the exact right equipment, magically, with her.

Which also kind of became a problem with the recipes. Sorry, but I don’t have the money to buy a 100 dollar piece of ham, nor do I have money to buy a whole wheel of cheese. It would shrivel/rot/grow mouldy before I could eat it all. Not to mention the equipment. Really, where do you want me to leave all that stuff necessary for these recipes? In my tiny-ish kitchen? Haha.
But if you just leave those expensive/big items away, I am sure you can adjust the recipes. Why melt a whole wheel and get a special oven for it when you can just buy cheaper cheese, less big piece and just melt that the normal way. Or with the ham, I will just go for a small piece of ham. And I am sure you can also use something else for the sausages without having to buy that big gun.
But still, I wish the ones writing those recipes would make them easier/offer alternatives.

The art was pretty wonderful, I loved how not only the girls were polar opposites in hobbies/studying/etc., but also in how they looked. The food was super-detailed and really, my stomach was just about to leap into the pages and eat the stuff there.

All in all, I will definitely read more of this manga, I want to see how these girl grow together, get more and more sisterly, and I also hope to see the parents (though given this is anime/manga world they will probably never show up).

I would recommend this manga if you are looking for a cute, fluffy, and delicious manga.