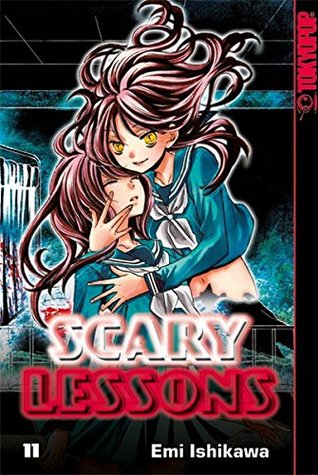 Doing a re-read of this volume now that I can buy this series in German. 😛

Ah yes, I remember most of the events happening in this volume, but it was still a lot of fun to read them again. To see all the characters, their scary stories.

Hour 1: Kotatsu + Midnight = bad business. Often in this series I quite like the protagonists and hope they are all safe and sound at the end (though everyone who knows this series will know that there are barely (maybe it would be better worded as never) any happy endings), but I have to say that I was disgusted with Yuna. How she stole money from a family member who is way younger than her. How she thought only about money, money, and herself. Bah. Sure, no one deserves such an ending, but she could have seen it coming. Why did she have to rip of the seal? Is it that hard to just leave stuff on items? Why can’t she just be nice for once? She has a loving family and she acts like this.
Also really, at least 80 euro for New Year money for the parents for Sora. o.0 Even kids saying they got a total of 50k yen? Which equals to about 400~ euro? What the hell?

Hour 2: Red chalk + blackboard = wishes come true. This was quite an interesting one, see how far our girl would go, and indeed, she went in the deep end. I did feel sorry for her, but then again, also not, as she did do some terrible things with that blackboard. The ending wasn’t as gruesome as often, but it was still sad. Though again, she kind of had it coming. Yes, this sounds harsh, but really? She erased not only small things, but also life. 😐
Still a good story, with a lovely reminder to be careful what you wish for, and not to go too far into it.

Hour 3: Chiyoko + friendchocolate. Creeeeeeeppppppppppy. And a more likeable character at last! I did feel terribly sorry for her. She doesn’t deserve this at all. 🙁 She was at the wrong spot, at the wrong time. 🙁 It was a good story though, and I also quite liked that the adults believed the kids. Often the kids won’t be believed, but in this one they believed them and even tried to protect them. The ending with Mari? o.0 Poor her.

Hour 4: The Marionette. Wow, that was creepy, I am still not sure if I liked any of the characters. Our MC clearly was delusional and thought she was everything. Junko was just meh. The boyfriend was terrible for doing that to both of them.
The marionette? I saw a bad end coming quite soon, there was just no way this would end up right. I did like the twist near the end though with Junko.

Extra Hour 1: The dreaming girl. Ohhh, I sure wouldn’t want those powers.  Especially if one can dream about their death (which is a gruesome one). 😐 I did feel kind of sorry for the girl, though she was quite evil with her new powers. I liked her better when she was without those powers. She was sweet, and cute. The ending, that poor girl.

Extra Hour 2: Ohh, that was a nice idea to add that. I guess this is before all of that stuff happened to Yuna? As the cat is still a kitten. Unless the cat had kittens and there are more kotatsu’s with seals.

All in all though I loved this volume, there were lots of scary things, bad endings, and much much more.