The last Waiting on Wednesday for this year! A new year, with hopefully lots of new books I can’t wait to read, will start soon!

For this last WoW of 2016 I got a book (well paperback, the hardcover came out earlier this year) that comes out 3 days before my birthday. It is a book by a writer that I really like, he wrote the Mysterious Benedict Society books, which I absolutely loved and still re-read (and should re-read soon again). I was hoping and hoping for a new book by him (either in that series, or just a new series), and then this book came out, and it sounds fabulous. Secrets, adventures, dangerous men following our MC, magic, and so much more. It sounds like a book that will grab me by my collar and not leave me alone until I finish the book.

Plus, look at that awesome cover, it is even more awesome than the hardcover. Though…. I already warned my boyfriend that if I liked the book I wanted the hardcover one as well, just for the cover. 😛 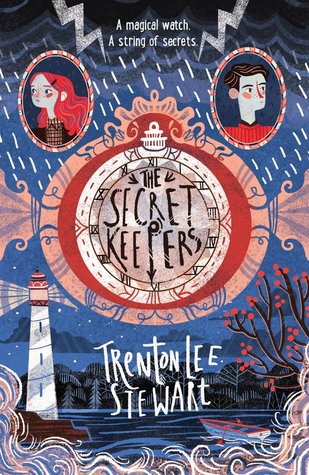 Eleven-year-old Reuben spends his days exploring, hiding, and practicing parkour among the abandoned buildings of the Lower Downs as a way to escape the rough times that have befallen him and his mom–but his discovery of an extraordinary antique pocket watch changes everything. When Reuben finds that the watch has the power to turn him invisible, he’s propelled on the adventure of a lifetime.
Now Reuben is being pursued by a group of dangerous men called the Directions, and someone–or something–ominously called The Smoke. They all want the watch, and with the help of new friends, it’s up to Reuben to unravel the mysteries surrounding it and protect the city from evil.