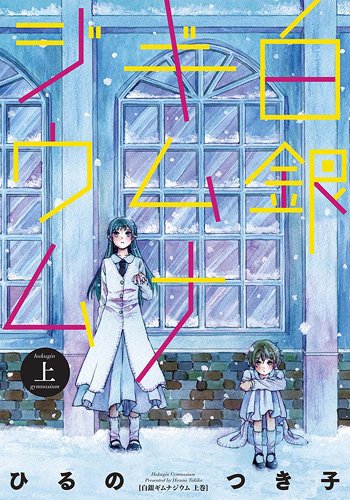 This was a cute manga with a stunning cover.

There are 3 stories, all connected in the way that we have recurring characters + it all takes place at the same place, an orphanage.

The first one is about Fiona and Amy and their bond. They see themselves as twins because they were brought in on the same day, side by side they lay outside waiting for someone to pick them up. You can easily see that these two have an amazing bond, I would say even further than sisters/twins. However, it seems that this does take place during a time in which girls had to marry, get kids, and that kind of stuff. There is no room for two girls to be romantically involved. Which is just terribly sad. 🙁
The story quickly turns to more drama as several events unfold, and those events set the tone for the rest of the story. Yes, I did cry. It was just too sad. Both were in pain. One had to make a giant decision that would impact not only her life, but also that of the other girl.
The ending was quite sad. It was too be expected, but still, I wish there was something else.

The second story takes place years after the first and focuses on Toto and Eris, both girls grew up to be almost adults. It is another story about love, love in a time in which people might not be too kind about being a lesbian. I felt sorry for Toto, struggling with her feelings, not understanding them, until BANG, she gets it. She gets it all. She understands. But what about Eris? Well, those of us who read the story can easily see both the feelings of the girls. We can see what both of them so desperately wants, and the ending made me cry. Not only in happiness, but also in sadness as we could see who was close by.
Amy makes a reappearance as well. She is now working at the orphanage. Which is kind of a nice idea, though I wonder if she did it in the hopes of seeing Fiona, or if she did it because she wanted to be there for real.

The last story was a bit confusing, I am not sure about the time line in there. Was this before or after all the events in the first story? I am glad though that there is some romance, though again we are told that they can never love each other. Not like that. It made me sad, everyone deserves a chance at love.

The art was really good, I love the style, it just fits perfectly with this manga.

All in all, I hope to be able to read Vol.2 someday and see how it all ends.

Oh and plus points to the cover! Especially when combined with the second volume. So beautiful!

Highly recommended if you are looking for some good shoujo-ai/yuri to read.