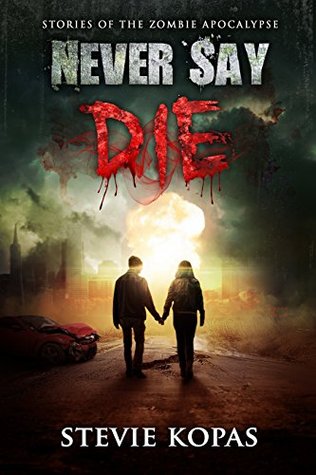 So I found out about this book through my new friend on Goodreads: Ash †Reviews of a FearStreetZombie†! I just had to read it when I found out. Zombies are one of my favourite horror creatures.

So what follows here is first the status update (as posted on Goodreads), and then in bold some added comments to that.

Jack: 2 stars. Sorry, but this was just sick. Especially the last part was just too disturbing. She had nothing to do with it, why did she have to, urgh, never mind. 😐 I could understand why Jack did what he did, but really? He knew what would happen. 🙁 I am not sure what I would have done if I was in his shoes, it is a difficult decision, but I am sure his sister wouldn’t have wanted this either.
Still definitely agreeing with myself. Yes, I am not sure what I would have done, but to endanger not only yourself but also your wife? No. If I didn’t have any connections to anyone I would have done what our MC did, but I wouldn’t have done it if I had a life. If I knew the consequences to those around me.
On another note, I did like how this one took place a few years after the zombie apocalypse. There were still zombies, there was still fear, but it seemed to go a little bit better with the world. Often books just pick the outbreak, so I am delighted with any changes to that.
Lastly, who the hell would do that to a human? That is just sick and disturbing.

Gordon & Elena: 5 stars. criesThat was just, sorry, that was just a emotional story. So so sad. 🙁 The author does something that I haven’t seen happening a lot. I won’t spoil the ending, just will say that it was heartbreaking, and I didn’t expect it. I loved how the story unfolded as well. Starting with an average day, though deaths are happening, to children coming back to life, and eating everything. o.0
I was worried about this one at first. I thought these 2 would either continue fighting all the time, or that one of them would die and the other would insert any kind of emotion. Luckily, it turned into something totally different, something really different. I was delighted with how they could set aside their differences.

Patient 63: 5 stars. Oh my goodness this one was terrific! I loved it through and through, though I definitely didn’t see that ending coming, but I have to say it was quite a wonderful ending (though OK, maybe not so wonderful for everyone).
This was definitely a heartbreaking story, with a twist ending that I didn’t see coming. I felt oh so sorry for Patient 63 (I will call her that as what happens later is a bit of a spoiler). Sorry that she was revived, and then used for experiments. Having no life of her own, no hope that she might get out.
I was a bit worried about the romance, but in the end I was definitely delighted with it. She deserves happiness.

Rosie: 4 stars. It did get a bit annoying. It was an interesting thing to have a six year old tell the story of the outbreak, and see how it was from her POV, but she was so frustratingly annoying at times. The ending was also a bit confusing.
Yep, I still think it was pretty great that they had the POV be from a child. It was quite interesting to see what she thought and how she acted and reacted. Though I did wish Rosie had gotten a bit smarter. She must have noticed that it wasn’t normal for her not to get x and y by zombies. She must have seen it was dangerous to just go outside.
The ending to this story was weird and confusing. I am not entirely sure what was going on with that Doctor.

Trevor: I am in conflict between a 1 and a 2 star. It was quite fun that our MC was that, but what he did in this one and how suicide and all that was handled? Nah. 😐
Yep, still my least favourite story, and I have decided on a 1.5 stars in the end. Yes, I did like what the MC was, not really a spoiler as you know it from the start, I mean, duh, of course it should be that. I was quite disgusted with what he did though. 😐 I know they did you wrong, but to do this? No. Just no. That is never a good thing.

All in all though, I really liked this book, and I hope that the author will write more books like this. I could use some more of these short stories taking place from various times in a zombie apocalypse.

I would recommend this one to everyone!