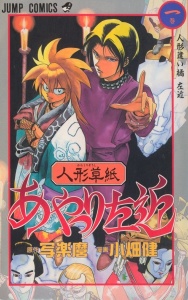 Then again, there are only 4 volumes of this manga, so maybe I will just complete it. It was still good, but I don’t know, there were various elements that just work better in motion. Like Ukon, or Sakon. The murders also work a bit better when it is all moving, now at times it was just a bit boring as it seems to drag on and on.

I also can remember that I found Ukon slightly annoying in the anime, but I have to say that I found him even more annoying in this one. Maybe I am just blinded by nostalgia for the anime and I forgot about the annoying puppet, or maybe Ukon is more annoying the manga.
Maybe it is also the whole he is a puppet but he acts, moves, and reacts like a human. You can see that he is a puppet due to how he looks (joints, his mouth), but other than that it is quite unnatural and a bit weird.

The arcs are also pretty long, both in manga and anime, but it seems to just drag on in the manga. The current arc that continues in the next volume is around 240 pages long… o.0 I know that there are manga with longer arcs, but really it all depends on how it moves along. How is the cast? How is the build-up?

The first arc in this one is quite a short one, and also a very sad one. About bullying, about suicide, about revenge. The ending was also sad, but also happy (I know, conflicting).

The second arc, and one that still continues to the next volume, takes place a bit earlier in the timeline (given Sakon’s look), and is about a group of people making a movie/commercial/show in a puppet mansion. Sakon doesn’t really belong there, as well as his aunt. Sakon got invited since he is a puppetmaster, and his aunt just tags along. 😛

I was a bit annoyed with the aunt though. She instantly jumped to conclusions, pointed fingers left and right, but never was correct in her assumptions. It was funny the first time, but after 3 times you wonder what the hell she is doing in the police force if she can’t even solve the basic of things. If she doesn’t even think before doing things. 😐

The art is pretty decent, though I have to say that the murders were a bit too gruesome and detailed for my liking.

All in all, still a decent volume, and like I said, I may continue because this one is so short.