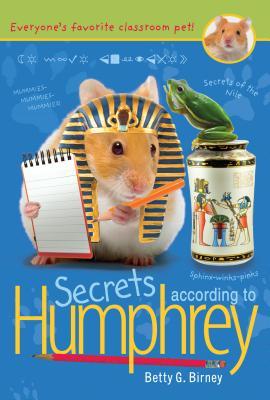 I am still trying to read all the Humphrey books. This one was next on my list!

This book is all about secrets, and about Ancient Egypt. I loved how well it all connected together, and how everything came together in the end.

However, I do think this one was one of the lesser books in this series. Humphrey already has quite a big ego, but it is getting bigger in this one. Come on, you are already a magical hamster (I would call Humphrey magical for being able to do all the things normal hamsters can’t do), no need to get any more special. I also didn’t quite like how he didn’t like people not telling him everything. That is how secrets work. I also couldn’t get why he, in all his wisdom, didn’t get that the teacher would be sad if one of her students left.

Of course he did some nice things, and I did like him, but it does get a bit annoying at times.

The secret clubs? It is quite nice, but I wasn’t all that delighted that they were leaving people out. Not even bothering to ask if they were included in something.

Before I start with some of the good stuff, I do want to mention that there were a few mistakes in the text. For instance: The Nile runs through 11 countries, not 10. And it is still up to discussion whether or not it is the longest in the world. I also noticed some mistakes in the sentences. Such a shame, I would think that such a series as this would be checked better.

I loved the fact the class did Ancient Egypt as a topic. It sounded so much fun, especially when the class was split in several groups each of them doing their own Egypt-related thing. The end results for each group were fantastic, they really worked hard on it.

The book club, what a fun idea! I am sure lots of kids will join the club. I would have joined it if I was that age and in that class/school.

We also meet again the teacher who bought Humphrey at first. She really gets a prominent role in this one, and I was so happy. Also nice that she consulted Humphrey in a way about a classroom pet.

The ending, and what happened there? I was delighted, but also sad, I will miss that character, but I am happy for her that she got her wish.

All in all, I did enjoy the book and I will definitely continue with the series.