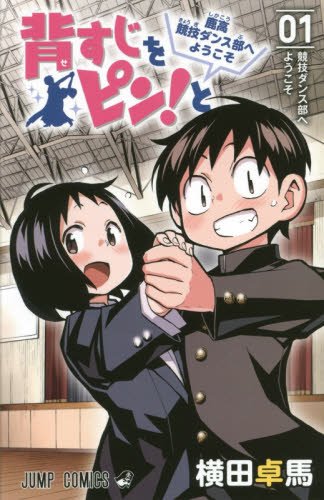 A new manga has been found, a new dancing manga at that. I was hoping to find a new one as I do love myself some manga about dancing/ballroom dancing/competitions.

And this one did have a good start, however I did notice that after chapter 4 I got a bit less interested and a bit more bored. It was still quite good, but I don’t know, I can’t put my finger on it what was wrong, but I just noticed that I had to drag myself through the last 4 chapters of this volume instead of flying through it as I did with the first 4.

The MC of our story seems like a decent kid, though I do get a bit tired of seeing his kind of character. With that I mean that he looks vastly different from his fellow classmates or friends. He looks like he got stuck with a chibi body and head while the others forged on and became more mature.
Then again, the same can be said about the partner in dancing, Watari-chan. She totally stands out as well in the crowd of high school girls. Everybody looks pretty much normal, and then you have these 2 characters. Such a shame, I don’t get why this trope (as I would call it that) is needed. Just draw the characters normally.

The MC was a pretty nice kid, though he needs to grow some confidence as he is doing a great job with dancing, and so what if you sweat, really, you are dancing, of course you will sweat a lot. That is normal. Your partner is also sweating.
I loved his dedication though, he did try his utmost best to become better at dancing. Practising everywhere that he could. In the train home, on his way to school/home, in school, at home. I am really happy with that, I was worried that he might just quit because it was too much, too hard.

There are also several parodies/hints to other series and even memes, and I loved that this was added. Then there was at least one case of breaking the fourth wall.

The other members of the dance club? Wellllllll… I am not sure what to think of that. The flamboyant president, the vice-president who is quite eager, the two second-years who keep bickering, it seems that the club has quite some character. 😛

I did feel kind of sorry for them that almost no one was interested in the club when they learned about either the president (and his weird ways) or on how much work it would be. 🙁 The club definitely deserves more members, and I was hoping we would see more club members.

We also meet an international character named Tanya. She seems like a nice girl, though I can imagine it must be tough to not speak any Japanese, it seems she is trying, but Japanese isn’t the easiest language to learn. I loved what Watari-chan did for Tanya. That sure must have surprised Tanya that someone would do that for her. Aww! I hope we will see more of Tanya and her partner in the later volumes.

The dances are pretty intense, a bit a la Ball Room e Youkoso only less ugly.

There are lots of jokes, and at times I was just laughing myself silly.

All in all, a pretty good volume, though again, I am still not sure why it took me so long to get through the last 4 chapters. I will definitely check out volume 2 and see if that one fares better.