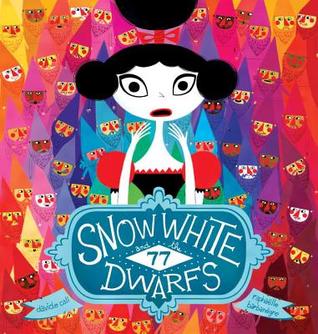 First up, thanks to my boyfriend for giving me this book for Christmas! It is a book I have been looking forward for a year, if not more, so I am delighted to have it in my hands!

This one takes elements from the Snow White story and then turns it into something quite different. For instance we have 77 dwarfs. Good luck learning the names of all of them (especially some just have weird names). I have to say that I liked the dwarfs in the original story more. 😛

At least those appreciated and cared for Snow White, these 77 dwarfs really got on my nerves, but I guess that is the point of the story. They were at times friendly, but mostly I found them rude that they expected Snow White to do all the chores, everything, in perfection, while doing nothing but complaining and making a mess of everything. Sure, she is living with them, so one has to do something, but everything? To x details? Nah.

I loved that the dwarfs were there in every colour of the rainbow and more! It was so colourful, and so fun to see each page with the dwarfs had a rainbow of colour (often they even were positioned in the right place to form a real rainbow).

I also want to know what kind of magic hair Snow White has to be able to puff it up in a big round fluff ball on the top of her head, and also two balls on her side. Really, she doesn’t have that much hair (as evidenced when she just woke up), but she can still magic her hair like this. wants to know the secrets

The end, well, she didn’t have much choice, but I wasn’t laughing so hard because of the ending, especially that last page. Girl, I would have done the same thing as you. If you have to pick between two evils, I would pick that one too. Yep. Definitely. Everything over x.

The art is super-colourful and a feast for the eye. Each spread of pages is a delight because there are details everywhere, and it was also quite interesting to see the illustrator capturing Snow White’s growing tiredness/getting more and more stressed.

All in all, definitely a book I would recommend. Snow White is already one of my favourites, but this retelling makes her even more fun.