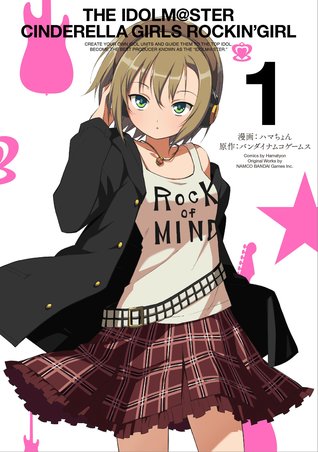 I am a big fan of the iDOLM@STER franchise, seen all the anime series/movies/ovas, read a lot of the manga, and I am still hoping for the game to be released in English so I can play that one as well.

So when I found out about this manga? I had to check it out. It featured characters from the Cinderella franchise, but probably before they got together, or it is an alternate universe. We also meet with several other girls from the Cinderella Girls, 2 of them are in Riina’s new idol group, and there are several just walking around.

I do have to say that I don’t really like Riina in the anime that much. She seems, as others also have called her, a poser. But in this one? At the beginning I didn’t quite like her, but then she started to change, she started to see in that maybe being a pop idol wasn’t so bad. That she could have fun with this as well while still liking her rock. Though it must have been quite a shock that she found out she wasn’t going to do rock. And that her fellow idols were cute, fluffy, and totally not made for rocking.
Her expressions are also so much better in this manga, much softer, and more fun to see. You can see her changing, even in just one volume. You see her make friends with her teammates Rika and Kanako. You see her have fun, laugh, and try to be a great idol.

The focus is mostly on Riina and her idol activities (or well, how it all starts), but we also have a focus on Rika, Kanako, and even a short hilarious part with Anzu and Kirari breaking stuff and running away (I loved the ending to that chapter). I definitely liked that the writer decided to also focus on the others, it makes the story even more fun to read and it also gives another look on Riina. We now see her from other people’s eyes.

It was fun to see them learn about how to be an idol, but also how to deal with jealousy, as some other groups or girls are further with their idol stuff. Even touring. I can imagine that it must be difficult to be older than quite a few of those girls and then to still be at the bottom of the ladder.

The art was really quite good, the style is nice, though there are still some points (like faces) that could be better, but I am sure that will eventually happen as the manga is still ongoing.

All in all, I will keep an eye on this one, and I would recommend it if you are a fan of idols or of the iDOLM@STER franchise.