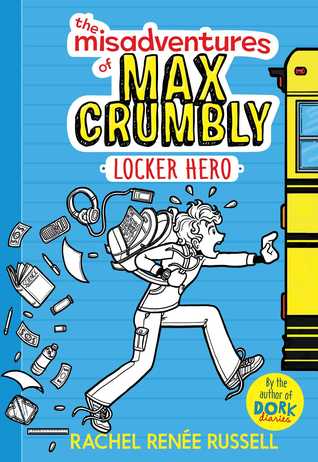 Wellll…. this was totally not what I had expected. 😐

What I had expected stuff about Middle School, about Max, about the girl he likes (Erin is such a sweet girl), about this bully he is trying to avoid (bleh to that guy), but instead about 180 pages of this book are about Max, in a locker, and oh yes, burglars. 😐 Yes, 180 pages of absolute boring stuff that is probably supposed to be all exciting but that didn’t fit with the book at all.

It did start pretty decent, sure I wasn’t all too happy with all the superhero stuff, but later I got used to it, and it was quite a bit fun to see it happen. Then again, I can’t really imagine a guy his age acting like that. From what I remember from my school years boys generally were interested in superhero stuff, but weren’t so into it that they wanted to actually wear an outfit, and become one. Well, if it fitted. For instance, it totally was bleh during the burglar stuff and it looked really out of place.

The bullying stuff was a bit meh (especially since it happened because of a small, unfortunate, accident), and I kept hoping that Max would find the guts to just tell someone about it (and no not Erin), but instead he keeps it to himself, and why? Because he is afraid his parents will pull him from school. Really? Ever heard of talking, maybe even with a counsellor of school present to help out? But I guess talking is for old people.

And yes, that was also my problem with Max, he was an interesting character, but I just got tired of him whining about his family, about his life, all the time. He even mentioned putting them in the garbage, or punching them. What? Why? I know I didn’t always like my parents back when I was that age, but to throw them away? Hit them? No. Just no.

I am also wondering why his parents don’t keep a better eye out on the little brother. There were just various things that didn’t make sense and just screamed bad parenting.

Also really, your comic book is more important to you than to call the police? Whut? I know that comic book is expensive and all, but aren’t you in danger? Urgh.

Oh and of course he doesn’t want to call the police, and why? Well easy reason: his parents. rolls eyes

Oh and to top it off…. the story ends with a cliffhanger so that means we will have many more pages about this burglary to go in the next book. Yay! 😐

There were also references to Dork Diaries (Brandon is Max’s friend, there is mention of Nikki). I quite like that the author added this to the mix. Max is a new character, but everyone is apparently living in the same city/place.

So yeah, I am not impressed with this book, and very disappointed. I had hoped for a new series to enjoy as I didn’t enjoy the other series by this author any more (it just kept being the same story over and over again with meh characters). Wouldn’t recommend this book.