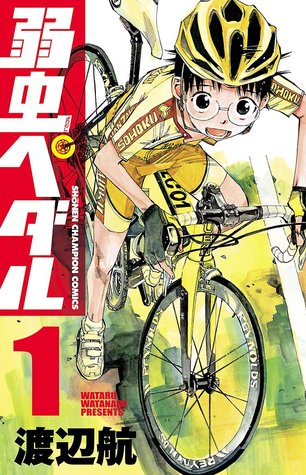 I have heard quite a lot about this manga/anime, and decided to check it out.

I am not sure if I will continue, while I did like the first volume, it was also still a sports manga and I was bored at times. So far I have only found a handful of sports manga or anime that I truly liked and enjoyed fully or at least most of it.

What also annoyed me was the exaggeration of everything, the way that nothing seems to match. I am not sure how to explain correctly, but really, the fact that someone just cycles 90 km in one day without breaking a sweat, oh and climbs a steep hill that everyone else has trouble with, even professionals, it just seems off and weird. I know it is fiction, but it just stood out like a sore thumb. Like they were trying to keep things real, but then thought to insert something like this.

I also didn’t particularly like the MC. He acts like I have seen countless of boys act. OMG I love manga/anime, now I am weird? And everyone is also acting like he is a pervert. rolls eyes

I did like his determination, not only for the whole Akiba stuff, but also for the anime club that he was trying to resurrect.

The other character we have, the guy who eats, sleeps, breathes bicycles and will do anything to win? I just found him annoying for most. Though he did bring some balance in the story with our MC on one part who is a giant otaku, and who just bicycles for fun, and him on the other part working his butt off and going to competitions.

But it had quite a nice art style. Though at times it looked a bit silly.

I may check out the next volume to see who won, though I can already guess. It is your typical sports manga, it is also yet another thing that annoys me at times.