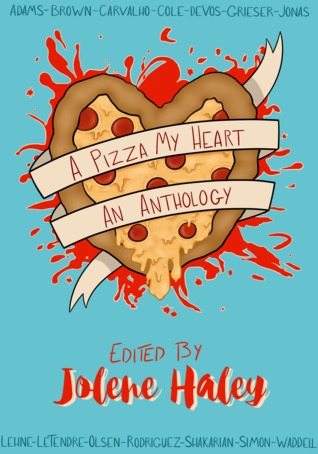 This was one book that I have been looking forward too since last year. I just needed it in my life and finally it came out (even though I expected it last year).

I immediately had to buy it when I saw it come out, and I am glad I did. Sure, it was a mixed bag, but it had some good stories in the mix. And for 0.99 euro I don’t mind a mixed bag of a book.

I also liked that we have all sorts of genres. From Sci-fi to mystery to thriller and romance. We have girl POV, boy POV, and even a dog’s POV. Some stories are short, others are a bit longer. I love the titles for each story and how pizzatastic they all are. Each story has one thing in common. Pizza. However, there was one story that had a clear lack of pizza which was just a shame. The last story was great, but I had some issues with that one.

As I often do with short stories, I have posted updates each time I read a story, and I will post those updates here.

Fresh, Hot, and Deadly: 4 stars. This was really good actually, I wasn’t too sure about the twist in the midst of the story, but it turned out to be quite well done. Plus who can resist a story about poisoned pizza and getting rid of evildoers that way? I would definitely like a longer story about these 2 characters, about that Program, about the pizzas. The two characters were really fun and nice!

Between Slices: 1 star. Nice idea but nah. It just didn’t work for me. I know this book is about pizza, but really, all I wanted was some action, and instead it was just a how-to on making pizzas. Guys, not the time. This story could have been better, the pizza parts better integrated in the story. Plus I am really curious about those zombies and what happened to the world.

Kneadful Things: 3 stars. What the fuck was with that ending? The whole story was pretty awesome, and I was sitting on the edge of my chair, but that ending just ruined it. A lot. 😐 So -2 stars for that one.
Really without that ending the story would have been perfect. A hint of pizza with a dash of mystery and a whole sprinkling of creepiness.

KissingDancingPizzaMURDER: 5 stars! This was just an epic story about murder! I had 2 suspects, but only near the end did I see another suspect and I just knew it had to be that person. And I was right! I love that the author made a short story so well that it keeps you guessing until near the end. Of course the story had pizza (duh!). I loved both Kate and Max, would have loved to see them get together.

A Slice of Adventure: 4 stars. A bit of a crazy story, but still pretty decent. This time we are heading to space. I did like the idea of a intergalactic pizzeria. 😛 That one I haven’t seen that much in books. Definitely not from the Earth perspective. Generally I only see it when people are making travels in space (which they can’t in this book). The ending was fun, and I quite liked it.

Pizza on the Brain: 3 stars. A fun story, but it feels like something is lacking. I was definitely hoping for that abandoned house to make a bigger appearance, why else hint to that house? In the end it was just a guy going along with his work, do his stuff, and then go to a party to meet with a girl he likes. Meh.

Pizza Buddy: An Orchard Pointe Story: 1 star. Sorry, but what? This story just seemed to drag on and on. So a girl who is being mean to her principal just finds a homeless guy behind the pizza place, chats up with him, offers all sorts of stuff, then leaves, and then some conversation between the homeless man and his dog, and that is it? yawns

Survival Pizza: 1 star. Um, what? It was quite a sad story, but really, I just wonder why this MC can’t just ask help from anyone. I know, dad got kidnapped, blabla alive, blabla police is a bad idea. But scavenging food from a dumpster is just no. Living in your car? Also no. I just couldn’t like this story, and just was hoping it would be over fast.

The Last Stop at the End of the World: 3 stars. Another sci-fi story, and a pretty decent one with enough worldbuilding that I could get a general picture of the place the MC and her boyfriend and his father lived. However, I just didn’t see the love that was supposedly so much between the MC and her boyfriend. 😐 Of course it had pizza, it took place at a pizza place. The ending was good, though I wish for more.

Where There’s Pizza: 2 stars. I am not really the kind of person to enjoy an animal’s POV, not at least like this. The dog was just annoying. And then suddenly x and y happen and I was like, hold on what? How did we go from this to that? This story just didn’t make sense, maybe it would have been better if it had just been from the human POV.

The Pizza Guy: 3 stars. This was pretty much the other side of the first story. Just instead of Marco we have a Corey, but their jobs are pretty much the same. Not sure if this was on purpose, having two stories pretty much the same, or that they didn’t check, but I did think it was a bit of a shame. It was good, hence the 3 stars, but eh, just a shame. Also Corey clearly cares more about money than his conscience.

Password is… : 2 stars. Pretty decent story, but I wanted to know what was going on with the guy. We don’t really get an answer except that it is apparently pretty terrible, and it is a secret someone is willing to kill for to keep people silent. 😐 It was also the least pizza story in the entire book. 😐 I also didn’t quite like the girl was so ill-prepared. Break in a house, and only have x minutes to do it?

Pizzamergency: 3.5 stars. Aww this was pretty cute! Baby goats, pizza, boyfriends, and much more. It was a bit plain, yes, but luckily goats are cute animals, plus it was fun to read how many baby goats were born. Also the romance between the MC and her boyfriend was really sweet, I also liked that even though he just finished his job he is helping out his girl.

Love Pizza No.9: 3 stars. A pretty cute story with a whole bunch of pizza, but the romance was predictable (I just knew what would happen at the end, and lo and behold it happened). I like Leo the most in the entire story. Parker was also nice, but I wonder if he he would have liked the MC if he hadn’t eaten the pizza, after all he did use a nickname for her, and was pretty friendly and sweet. Curiouser and curiouser.

Madam Miraval’s Pizza Palace: Well, this was apparently a story that doesn’t take place in the book, instead you have to open a link. I can tell you, that doesn’t work on a Kindle. At all. The page opens, yes, but getting anywhere, or reading the text is impossible. So -2 stars for that.
I had to type out the URL in my browser on my PC to get it to work, and then I quite liked the idea, but yeah, just a shame that it was done this way. Would have better if they just kept it to the book, I have read enough choose your own adventure books that work fine on ereaders.
I have some more choices to go through, but the first one I picked (I choose to go with the girl) was very sweet.
Will give it 3 stars. Would have been 5 stars if it wasn’t for the whole URL stuff.

As you can see, there are some great stories in this mix. Stories that I would like see further developed and having a bigger spotlight than just a few pages. I am definitely happy I read this book, though I am having a big craving for pizza now. 😛