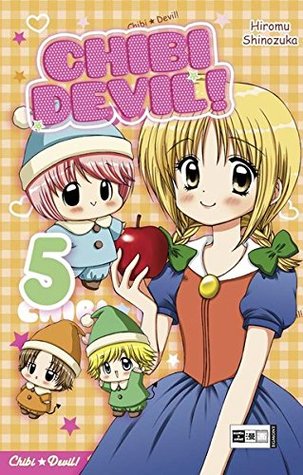 A new month, and that means I can buy 2 new Chibi Devil volumes! Yay!

This was yet another hilarious Chibi Devil volume, though I was not so happy to see Pepe again. I will talk about him a bit more in the review. Luckily, there was enough good to the manga too. It is still so much fun to see the babies grow up, now toddlers, and see them discover the world.

They still have trouble talking, but they do their best, and are improving oh so fast. A lot of things happened in this one, my favourite out of them was how they got Mao-chan to eat pickles. 😛

But we also have a first grocery shopping trip (and all that happened there which was just hilarious to see), how Mao-chan should handle mean people (Pepe), and also what is going on with Karin-chan. Then there were quite a few bonus stories and they were just so fun.

I did feel quite a bit sorry for Karin when we found out what was going on. She just wants x, but the boys only want to do y. I can imagine one might get frustrated, though hitting people and getting angry isn’t really right, but then again this is a toddler, still learning how to handle emotions and feelings.

Pepe, meh, he is just so annoying and mean, I can’t see why there was a need to add such an obnoxious character to the mix. I also disliked him a lot in the anime, even later when he turned a bit nicer. I just didn’t like how he acted towards Mao-chan who was trying to help him with his house. Tripping him, brushing a paintbrush over Mao-chan, and so many other things. I just wanted to hug Mao-chan, and kick Pepe back to hell or wherever that thing came from.
It is just a shame that they added him.
Even later in the story when they were sort of friends, I just couldn’t like him. I knew he had a mean streak in him, and I knew he would do stuff that would hurt people.

I am hoping the next volume will also focus a bit on our two lovebirds, I quite missed that part in this volume.

I am still loving the art! It is just too cute!

Well, I will be reading the next volume soon, and then it is waiting until March arrives until I can buy 2 more volumes. I am sad that I am already halfway through the series now. 🙁