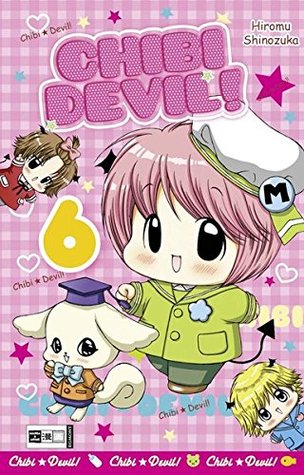 A really packed volume, with lots of hilarious situations, our demon babies are growing up, and much more! I really liked each and every page.

We have new characters (well, not for me as I already saw the anime, but new for the manga). Not only 2 new babies, but also their parents! We finally meet Chiyo and Ryu, and boy what a characters those two are, especially Chiyo. 😛 Chiyo was just a bit too precocious for her age. Falling in love, and marrying left and right. Dang, that girl sure knows what she wants. It was hilarious to see how Honoka reacted to her when Chiyo was targeting Mao-chan. It was a bit childish, especially considering Chiyo is just a kid and it is just weird if you are so possessive, but then again, Mao-chan cuteness enchants everyone.

It was quite hilarious to see how our girls (and the ones being the dads) reacted to the news when they found out that, yes, there are more demon babies and kindergartens like this one. I know that at first I was also thinking it was quite weird that just these 3 girls were chosen, I was wondering if there were others. It is a shame it is only these 2 though, I would love to meet up with more demon babies and their surrogate parents.

Thankfully Pepe isn’t having such a big role in this one, I still don’t like the character and any time he is away is the best time for me.

Then we have various other events happening. From grocery shopping (the kids have to learn to do errands, and it was hilarious to see what happened on the trip to the supermarket, but also what happened in the store, even the aftermath was great, poor Director). Then we have some theatre (which turned awkward real fast, thanks Mao-chan). I wasn’t sure about the storyteller person, he was a bit too creepy and perverse for me. I am glad that the Director and Ito were agreeing with me. At least that person could tell stories, if only that person would do that without all the creepiness. That would be perfect. And then there is a whole bunch of other fun things happening. I definitely love seeing our little demons grow up, and it seems instead of teeth, or maybe they will also have teeth and changing them, they have wings growing/being replaced. I also delighted in seeing the little ones helping (or trying) with chores.

All in all, a very fun volume and I can’t wait to see what will happen next. I am kind of sad though, I am already over the half-point of this series. I just wish it was longer. It just goes by too fast.