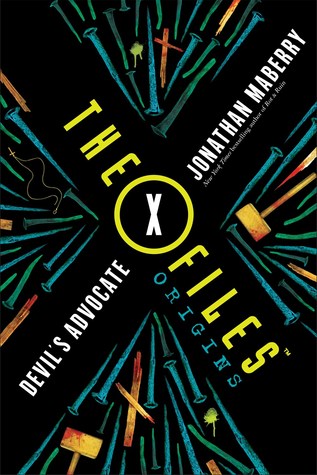 Finally a book about the time before the X-files (at least I never saw one about Scully and Mulder in their teenage years).

A book about teenage Scully (this book) and teenage Mulder (the Agent of Chaos book). Written by two different writers. I only really read this one, so I can’t speak (much) for the Agent of Chaos one (which I kind of dropped, as I couldn’t believe Mulder’s age, and also a lot of stuff was just a bit to conveniently placed, at least with Scully it felt more believable that this may be what happened to her and that this caused her scepticism).

I am quite a fan of X-files (even though I didn’t complete the whole series, but more on that in a bit), though mostly of the random monster of the week episodes. The story parts? At times good, most times boring as hell. It was also the cause for me to stop watching halfway into the series. Great characters, wonderful monster of the week episodes, lots of me shipping Mulder and Scully (kiss already!), well-written stories, spookiness, but the story parts that often took quite a spotlight? No. No. No.

Now back to the book. 🙂
From the start I just knew this was Scully. I am not sure how to explain, but her voice just felt real, it felt truly like Scully, how I would imagine her to sound during those teenage years. She was slightly sceptic during the first pages, but quickly you could see her open up more and more as things got really hairy and scary and proof of something else unnatural got more abundant. I definitely think the author did an amazing job at starting with slight sceptic, then opening up to what might be out of this world, and then, due to stuff losing all hope again (hey, no spoiler, this is Scully, everyone knows she is a sceptic (though from what I could see in the show she is slowly opening up to things again)). Which is logical giving the screwed up stuff happening in the book, and the ending that followed all that stuff. Boy, oh boy. Anyone would turn sceptic when that crap happens to them, when all of that is revealed. When everything is turned upside down. I won’t say what happens, you will have to read the book. Muahhaha. 😛

The book quickly goes from creepy, to OMG WTH in quick succession. I mostly read this book during the hour I had before I went to sleep, so you can imagine I didn’t have much success sleeping. Really, it was that creepy, and there were twists and turns at every corner, every point. Everyone was a suspect in this story.

About the actual culprit? Welllllll, at first I didn’t see who was the true culprit to all these things, but then there were some more hints, and I just knew it had to be that person. And it turned out to be that one. But the writer definitely did a wonderful job laying out some false stuff to trick us, and not only us, but also the characters, especially Scully.

We don’t only see Scully. Oh no, we also see the agents that follow her. We see the Angel. I definitely like that those were added as it gave a bigger picture to the whole story, plus it did explain a whole lot of details about why Scully is having these visions, why stuff is happening, why she moved (yes, even that).

The visions/dreams? shivers There were really creepy, quite disturbing, and bloody at times too.

There were just two points I didn’t like in the entire book.

First up the dramarama at the end (come on really was that all needed). It just felt fake, and I just wanted to stop reading. Such a shame. I can imagine things will get out of hand if x and y get revealed, but really this big? Wow.

And second the whole Booohoooo a male is assuming I am a weak girl part and now I hate/dislike his guts and he is such a jerk. That just made my eyes roll out of my skull. It is something I see more and more in books, and instead of feeling sympathetic (because I am a girl myself, so apparently I should agree or something) I just feel like I want to hit something (and I am generally a peace-loving girl). I just feel the girls are being dramaqueens. Especially in this book. The boy, he loves you, he likes you, he is just worried about you, and you know he has a hard time with words when he is around you. He probably knows you can handle yourself or at least mostly (because he knows you do fighting sports and you are oh so tough), but he only wanted to help you, he only wanted to support you. Because, hey, serial killer! But hey girl, if you can handle that on your own, sure. Don’t come crying when you get killed, or left for dead, OK? Because yes, I see this happen as well. 😐 rolls eyes some moreeyes fall outgathers them and puts them in and rolls some more
Poor boys. Poor guys.

Oh, I have one more thing, a good thing, don’t worry. The covers! I just love how you can also spot the Scully and Mulder in those. Scully’s features her cross necklace, Mulder’s has dog tags.

But I am definitely glad I bought and read this book. The author did a great job on writing Scully, the story was creepy, scary, and at times horrible (but not because of the writing, but because of the events happening). I would recommend this one. Though I will warn that it might not be the best idea to read it before going to sleep. Unless you want your dreams to feature a scary angel.