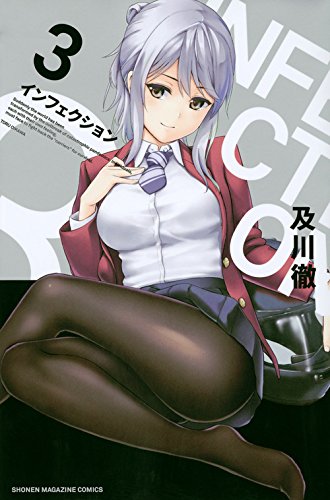 A pretty decent volume in this series. There were some stuff that was a bit too unbelieve, and I hated what they did near the end (that trope really needs to die, can we just have some good survival zombie stuff without going weird, please?). Plus all the fanservice just felt grating and annoying.

So after months of waiting, there was finally a new volume to read! I was a bit sad that I couldn’t read it on the day that I found out about it, but luckily the next day I had some time before it became busy.

And it was a good volume. It was good to see the characters again, to see their quirks, to see them survive, to see romance bloom. But there were also various things that I didn’t quite like.

Let me start with the fanservice. I knew back when I started that this would be a manga with fanservice. After all one of the characters isn’t wearing pants or skirts, no, this girl still walks around with a thong. Yep. And then there were enough parts with pantsu shots (even at the most inappropriate moments).
But it really took quite an overkill in this one. Often a dream by our MC (what a pervert :P). He would imagine the girls his friends with stripping off tops and shirts, or shoving their parts to him. We see quite a few gigantic boobs, with of course nipples, this one doesn’t shy away from that, boing around.
Then later we get the return of the most horrible character in the entire manga (not counting the carriers/zombies) and a certain event happens. For sake of spoilers I won’t tell you what happens, but really, was that needed? It was absolutely cringeworthy and I wasn’t amused. 😐
Then there is a pee scene…. With quite a close up of said underwear (very tight underwear) with pee everywhere. Um, eww? No. Then later we even have more scenes about this. Why was this needed?

The second thing was definitely the thing that happened at the last part of this manga. I love normal survival horror, and I don’t quite like it when something happens that make it beyond survival manga, even beyond normal zombie manga. It is something that also happened in a few other horror manga, and sorry, that trope can die and burn in a fiery pit somewhere. Is there really a need to add this? Aren’t the carriers already the worst that could happen?

I also didn’t like the appearance of said bleh character. And with me many others, given the comments I saw online about it. She is a horrible, manipulative person who will do anything for herself to survive and will take down anyone who she can’t use any more, or who is getting in the way. Even later during a pretty shocking moment she did the one thing I kind of expected her to do, but was hoping wouldn’t happen. Time and time again she shows us that she can’t be trusted. She hurts people left and right. Sadly, thanks to this acting of hers, plus how she treats males, is how she survived for so long. I do hope that she won’t be around long, or that, like with other series, she will get a redemption arc and we suddenly have to forgive her or something.

But there is enough good. We find out a bit more about the carriers, not that much, but a few things here and there that we can store with the other hints we got. I had quite a laugh at the scientist who just plucked a worm from a carrier and ate it. It was also disgusting, but I also had a laugh at it. Everyone was stunned, and he acted like it was just nothing. All for science I guess.

There are lots of action packed scenes. There were also a share of sad scenes that made me cry. Of course disobeying orders is a bad thing, but I think I would have done the same if I was in the MC’s boots. I would take the consequences later. First I would want to make sure people are safe.
And of course I can also understand the fire fighters side. They can’t save everyone. They have to choose, it is a hard decision, and it can break people, but if you don’t follow orders you will only cause trouble, plus you might destroy the chances for the group of people you were going to save, or the area you are trying to rescue.

The characters are fun, even the new character, though she became a bit dere dere, then again, I can forgive her for that. With all that happens.. eh, anyone would probably go berserk.

I do hope for a bit more romance between certain characters. So far I don’t really have a coupling I am rooting for, I just have various girls I would like to see our MC with, I am happy with any of them becoming his girl, they are all sweet, kind girls that fit with him perfectly. Maybe that is why I can’t pick who I will definitely ship, they are all just so sweet.

The fire fighter who keeps saving our MC? What is he? Superman? Something else? I mean he does stuff that normal people can’t do, even if they were in an elite squad. Eh, it gives a bit comedic relief to see him suddenly pop up out of nowhere and through a bunch of carriers.

Of course I was still highly disgusting by the carriers, especially those worms that just pop out of eyes and ears and everything. Urghhh, I am getting sick just thinking of it again. shivers

For the next volumes I hope more answers about the carriers, more new characters, a bit less of that one thing I was talking about earlier (pertaining to the manga changing from normal survival horror to something else).