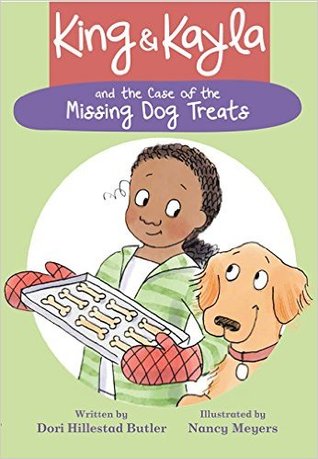 I was also a bit worried, the POV of the book is the dog. We see what he thinks, what he says. Why was I worried? Because I was thinking this would be a book that would either have an annoying MC, or that it adds a magical element with that the owner can understand her dog. Sorry, I am sure that the last part could be good, but I have read many books were it was just badly done.

Luckily, Kayla doesn’t understand King. Instead she just guesses what he wants based on how he reacts, or the situation at present.

King is a sweet dog, and I loved how he tried to help his owner out, even if it meant he got falsely accused for a bit.

I was thinking it might have been the puppy at first, but then certain events happen…

The actual whodunnit? It was quite fun, and I didn’t expect it to be that. So good job!

The illustrations were pretty decent, I quite liked the style.

All in all, this is a book I would recommend. It is short, but really fun.