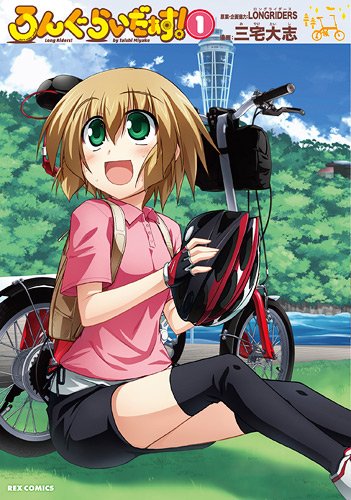 So the anime is now finally finished, and I decided to check out the manga, to see if it was different, or better.

But it turns out everything is pretty much the same, well, OK minus the animation errors that the anime was full with. But the art… humongous heads, seems we went back in times with the anime eyes, and people who don’t look their age.

Yes, that was also a problem I had in the anime, but also now in the manga. I am sorry, Ami is not 18. I cannot believe that. I know in anime/manga world you have lolis, but that would be her new friend Hinako. Ami however looks stuck somewhere between 12-14. Not only with how she acts (childish, some stuff that should be logical to everyone is illogical to her), but also with how she looks. I know how shocked I was when I learned this girl was 18 and in college even….

I must say that at least the manga is a breath of relief, no terrible CGI/computer stuff. The bikes look just as detailed as they did in the anime (though less crappy 3d-ish). It is definitely a bit weird. The characters look quite out of place in a world of detailed bikes, backgrounds, and other stuff.

The story is, just as the anime, quite good. I watched it for the bike rides, for the bike stories, and you do get those in this one. At times it is a bit unbelievable, a girl who never really rode bikes can suddenly ride about 50-60 kilometres. But you quickly forgive it because what happens to Ami at the end of such a ride is pretty dang realistic. Poor Ami.

So I am not going to read this one any further. If the art was better for the characters I would have probably read further, but now, plus the fact that it is all pretty much the same as the anime, no thank you.

Still I would recommend it if you don’t mind slightly bad art for characters, a character who doesn’t match her age. But also if you  love bikes and trips with gorgeous scenery and also love a varied cast of characters.