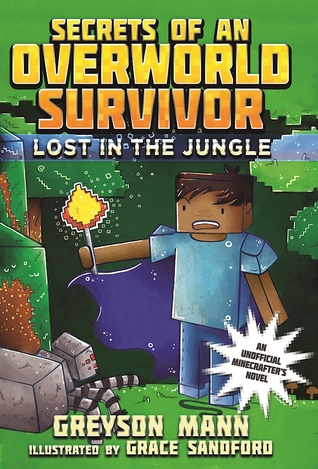 So I have absolutely nothing with Minecraft, no interest, no nothing. However, when I spotted these books (or actually previews of pages) being tweeted by the illustrator (whose work I really love) I just had to get them. Yes, I bought the books because of the art. 😛

I think I would have enjoyed it better had Will, our MC, been better. And not so obnoxious, rude, a jerk, an idiot. I really wonder how he survives in this world. He knows NOTHING about it, and also doesn’t care about safety, preparing, shelter, or anything. He just wants adventure, but then is crying when it gets tough. rolls eyes
I was hoping that this would just be a first book problem, but no, in the second one he has some redeeming parts, but they were quite little. For most part he was just daydreaming (and thus falling off a cliff (and almost falling of other cliffs)), being rude to someone who just wants to help him (and who is taking this serious and being serious doesn’t mean she isn’t fun, she just knows when to have fun and when to take care of her body), being an idiot, being ungrateful (he wanted to have a diamond sword, but oh no if they find diamonds then suddenly he is fixated on that stupid mine cart stuff again).
I also wish he would stop being such a baby. Instead of crying all the time about his brother, why doesn’t he learn something and make his own path. And with that I mean with preparation, not just walk into the jungle and hope you are fine. sighs
Sure he did one good thing at the end, so yay for that, but seriously, that was pretty much one of the few things he did right.

Mina however was a breath of fresh air in this book, and I loved her so much. She is prepared, she is fun, she is serious about things, and I loved that she was a potion maker and like inventing stuff. She is also totally kick-ass and I would have loved her to get the main character role. I also found her sweet, how she stuck to this guy and just helped him out each and every time. I know a lot of people would just have rolled their eyes and turned around walking away from all this.
I hope she will get a bigger role in the next book (though I am not sure if I will read those).

The adventure in both is pretty fun, the first book is about a jungle and the second one about mines.
It was definitely a page-turner you just wanted to know what will happen to our characters. Will they make it out fine? What about the monsters? What monster is lurking above them, or in that corner?

The monsters were quite interesting, of course I heard of them, Minecraft is something that is so big that you can’t really escape it. Toys in the toys store, twitter, just internet stuff. Especially the creeper is the big popular guy. 😛

The art was just as fabulous as I knew it would be. Her style just fits perfectly with these books, and I can’t wait to see her artwork for the other books that are coming out. I will definitely be buying those, I am not sure I will read them, but I need them for the art.

I am not sure if I would recommend this one. For the art yes. For the story yes. But the characters (at least the MC) not so much.